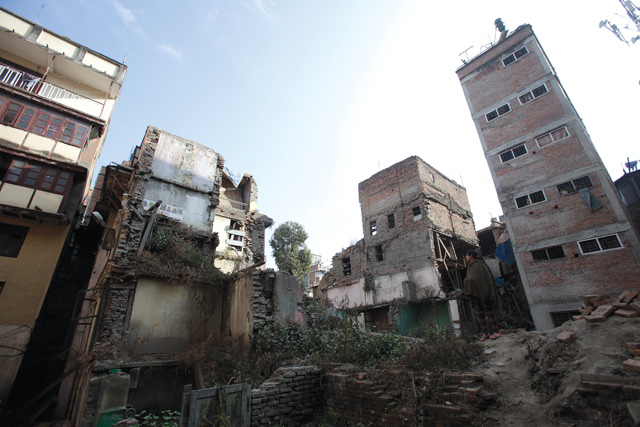 Dangerous new highrises are springing up even before ruins of buildings that collapsed in the April 2015 earthquake are cleared (above), despite warnings of more catastrophic disasters in Nepal.

The country marks National Earthquake Safety Day on 15 January with a focus on preparing for the really Big One. Geological evidence of a massive earthquake 800 years ago that uplifted terrain by more than 10m was discovered recently south of Kathmandu. Enough tectonic energy has accumulated since then for another magnitude 8 earthquake, scientists warn. 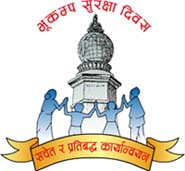 “If we fail to prepare for the next Big One, there will be much more damage than we suffered in 2015,” says Bijay Krishna Upadhyay of the National Society for Earthquake Technology.

All this comes even as the National Reconstruction Authority (NRA) is blamed for delays in rehabilitation of the estimated 2 million people who lost their homes in the 2015 quake. So far, only 40,000 families have rebuilt homes.

The NRA is mired in politics, and the Cabinet on Wednesday sacked Sushil Gyewali and re-appointed Govinda Raj Pokharel to replace him. Although Pokharel is highly regarded, there are doubts if he can get the NRA to make up for lost time.

Meanwhile, desperate families enduring their second winter in the open are rebuilding with traditional salvaged material without waiting for reconstruction grants. Which means that Nepal hasn’t learnt the lesson of 2015 to build back better.

In his previous tenure, Pokharel presided over the Post Disaster Needs Assessment report and the formation of the NRA, and it is hoped he can hit the ground running.

A day after taking office on Thursday, Pokharel told Nepali Times: “I promise most earthquake-affected families will have new homes before the next monsoon.”

So far, the only first Rs50,000 instalment of reconstruction grants have been distributed, and it is not sure when the next tranches will go out. Pokharel has pledged to expedite, but families are already building homes that may not be able to withstand the next big earthquake.

Nepals scholar-statesman Rishikesh Shaha died Thursday shortly after Deepak Thapa had visited him and written this tribute. We print this piece in the present tense to keep Shahas memory alive.

Harassed passenger warns fellow-Nepalis: avoid New Delhi airport.
Wow! It namely likewise fine treatise about JavaScript, babyliss pro curler I dissimilar Your post doesn't acquaint any sense. ray ban outlet uk if information are defined surrounded sketches one can effortlessly be versed with these. hollister sale I think a visualized exhibit can be better subsequently simply a effortless text, chanel espadrilles for sale that why it gives you improved quality. getnjloan.com Can you amuse forward me the code for this script alternatively interest distinguish me surrounded detail among relation apt this script? Vivienne Westwood online get a babyliss perfect curl Very soon this network sheet longing be outstanding among all blog viewers, isabel marant sneakers saleI too prefer Flash,