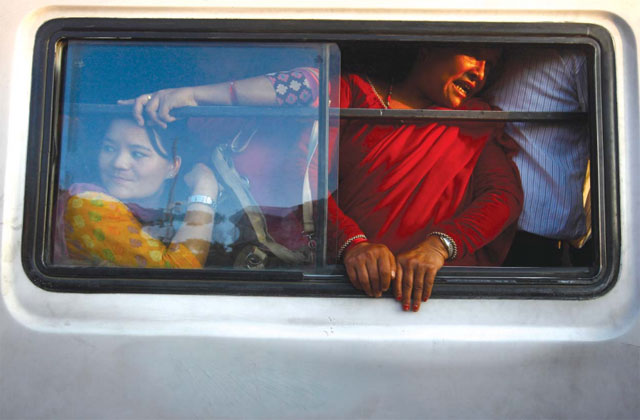 Petroleum supplies from India that eased with the election of KP Oli as Nepal’s new prime minister is still only 10 per cent of normal. The annual Dasain exodus of people from Kathmandu has started, but the diesel shortage has limited public transport (pictured).

The demands of Madhesi parties are still unaddressed, and the streets of the Tarai could flare up again. Oli has his work cut out. He pushed the country to the edge, and now needs to bring it back. He needs to visit the Tarai and try to reunite the hills and plains. It will not be easy, the anger among Madhesis this time runs deep.

Instead of reaching out, political parties in Kathmandu are preoccupied with dividing up among themselves the posts of prime minister, president, vice-president and speaker. The UCPN(M) is staying away from the presidential race, and the UML is hoping to fill that post.

Top contender is Subhas Nembang, who served two consecutive tenures as Constituent Assembly chair. But Maoist chair Pushpa Kamal Dahal and Bijaya Gachhadar of the MJF(D) are trying to persuade Oli to offer the presidentship to the NC so that it doesn’t oppose constitutional amendments to satisfy Madhesi demands.   But Oli feels double crossed by Sushil Koirala for refusing to hand over the prime ministership to him as per their understanding. But he may have no choice, the NC has the numbers in parliament to prove Oli a failure. If the amendments are not passed, the Tarai unrest may continue as well as the Indian blockade.

Nepal may have a new president between Dasain and Tihar, and a new speaker by this weekend. The speaker’s position is set aside for the UCPN(M) but no one in the party apparently wants the post.