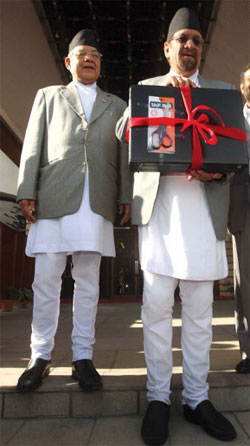 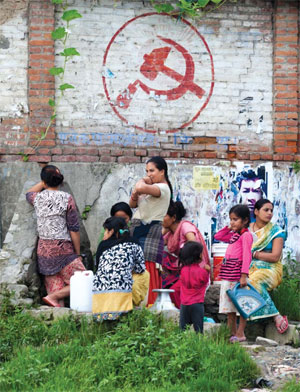 The people’s apathy with government is turning into antipathy. Across the country, as they struggled with daily survival, few were interested in the contents of the government’s Rs 618 billion annual budget presented to Parliament on Sunday. When you expect nothing from the government, you are not disappointed when it does not deliver.

So, while Mahat was preparing to present his budget at the doorstep Parliament (above) women and children in Banepa queued for a trickle of water from a spring (right). And while the UML’s chaotic party jamboree was winding down, vegetable farmers in Kalimati dumped tons of tomatoes on the middle of the road to protest low prices. Just as well, because the government hasn’t been able to stop rampant pesticide residue in vegetables from poisoning consumers.

Nepal’s rulers and the people who elected them seem to live in parallel universes. It’s a government for the government. The people be damned.

Survivors of the conflict that ended eight years ago still wait for justice and atonement. Thousands migrate every day to work in the Gulf, Malaysia and India. A new study says vulnerability of Nepali migrant workers to exploitation abroad is heightened by routine abuse within Nepal.

Tilak Pathak in Nepal, 16 March
Wow! It namely likewise fine treatise about JavaScript, babyliss pro curler I dissimilar Your post doesn't acquaint any sense. ray ban outlet uk if information are defined surrounded sketches one can effortlessly be versed with these. hollister sale I think a visualized exhibit can be better subsequently simply a effortless text, chanel espadrilles for sale that why it gives you improved quality. getnjloan.com Can you amuse forward me the code for this script alternatively interest distinguish me surrounded detail among relation apt this script? Vivienne Westwood online get a babyliss perfect curl Very soon this network sheet longing be outstanding among all blog viewers, isabel marant sneakers saleI too prefer Flash,