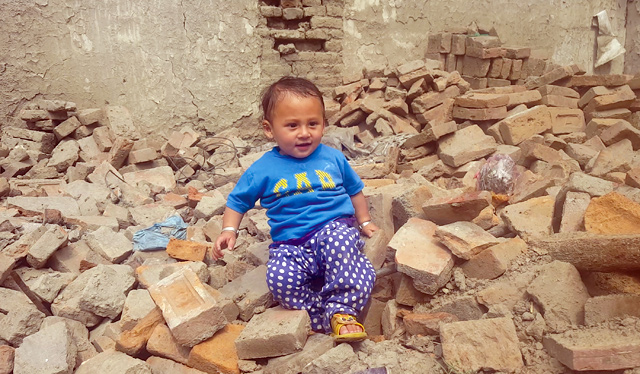 Sonish Awal is now 17 months old, a happy baby and a famous one.

Photographs of his rescue last year from underneath the rubble of a house after being buried for 22 hours went viral, and was featured on the folded cover of the 1-7 May edition of Nepali Times the week after the earthquake.

“I keep thinking what would have happened to me if I had lost him,” says Rashmila Awal as she hugged her son this week. The family lost everything in the earthquake, lives in a rented room in Bhaktapur and its economic situation is precarious.

Rashmila vividly remembers hearing the baby cry from underneath the rubble on 26 April, and Nepal Army soldiers rushing back to rescue 5-month-old Sonish with hardly a scratch on him.

Bhaktapur’s miracle baby is now the centre of attention, as tv reporters queue up to feature him for their first anniversary packages. Sonish has got used to the cameras and seems to enjoy the attention. 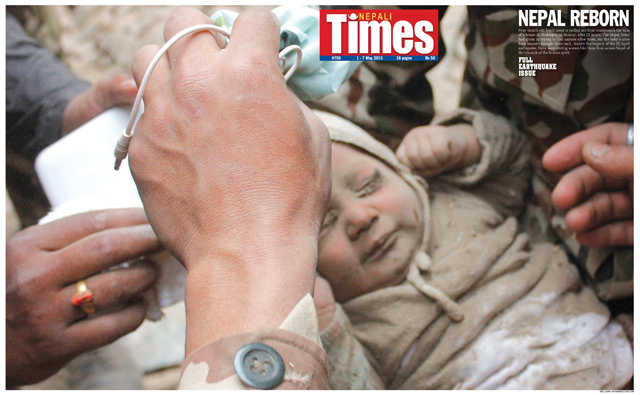 “He has become very active, he is always up to some mischief or other and keeps us all on our toes ,” says Rashmila, “the neighbours love him, and he keeps everyone entertained.”

Many think Rashmila doesn’t have any worries now because her son is so famous, but only she knows how difficult it is to take care of her family and how much she has depended on the kindness of relatives and friends.

She has horrific memories of the earthquake, and the fear that she had lost her son. Not a single day goes by without her thinking of the home her family lost. Her only wish now is to rebuild the house, but there isn’t enough money. Also, her family doesn’t have the land title, and even if it did the municipality may acquire the property it for a road widening project.

With her husband Shyam’s meagre income Rashmila finds it hard to afford food and rent. A neighbour is paying her daughter Sonia’s school fees. The parents want their children to have a proper education so they have a good future, but for the moment life is a struggle.

Still, Rashmila counts her blessings, feels lucky to have overcome the worst, and is hopeful about the future.

She says: “The most important thing is that the children are safe. I feel like God is watching over us.”