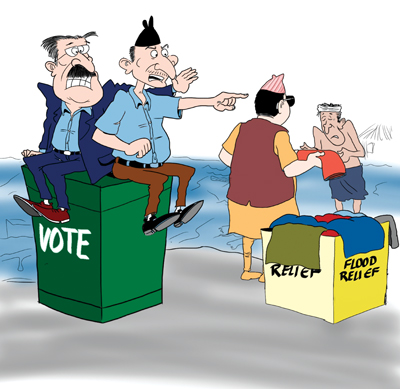 It is an indication of just how defensive and insecure the political parties have become that they lashed out the way they did this week at ex-King Gyanendra’s visit to distribute flood relief in western Nepal. The former king is no saint, but the parties are just exposing their weakness and trying to hide their lack of performance in the past six years by threatening to put the ex-king in jail. On the other hand, the breakaway Baidya-Maoist wing is taunting the parent party by threatening an improbable alliance with Gyanendra.

No political party in Nepal today can boast of a credible and stable leadership that deserves public vote of trust. The Nepali Congress has been embroiled in an intra-party feud between Koirala and non-Koirala factions for more than a decade now. The UML has its own ideological and political disorientation to cope with after the exclusive all-Bahun leadership led to an exodus of Madhesi and Janajati leaders last year. The Madhesi Front is also enmeshed in a facade of unity amidst squabbling over leadership. But the party which is undergoing the biggest political crisis at the moment is the UCPN-Maoists. The only thing the High Level Political Mechanism has been able to give the people is a high level of cynicism.

A yam between two stones (and a huge boulder)

What is behind the Maoists anti-American rhetoric?
RABINDRA MISHRA

Freedom has meant a daily struggle for kamaiyas and relief in yet far away
HEMLATA RAI
Wow! It namely likewise fine treatise about JavaScript, babyliss pro curler I dissimilar Your post doesn't acquaint any sense. ray ban outlet uk if information are defined surrounded sketches one can effortlessly be versed with these. hollister sale I think a visualized exhibit can be better subsequently simply a effortless text, chanel espadrilles for sale that why it gives you improved quality. getnjloan.com Can you amuse forward me the code for this script alternatively interest distinguish me surrounded detail among relation apt this script? Vivienne Westwood online get a babyliss perfect curl Very soon this network sheet longing be outstanding among all blog viewers, isabel marant sneakers saleI too prefer Flash,