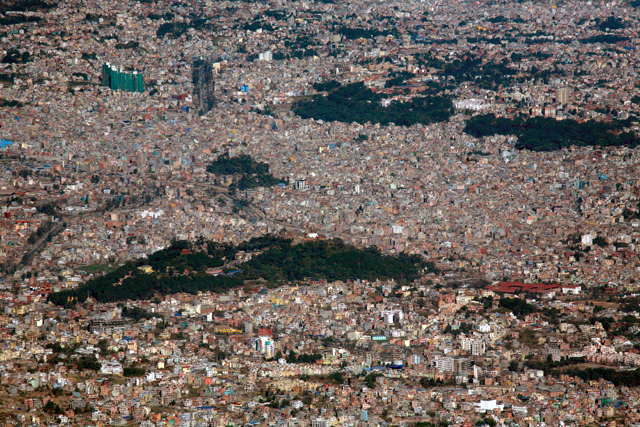 At a time when Nepal is getting its 10th prime minister in ten years, the capital is preparing to welcome its first Mayor in 15 years.

With nearly all the 170,000 votes counted as we went to press Thursday evening, Bidya Sundar Shakya of UML was leading by a 14,000 margin. Shakya and his NC counterpart in Patan, Chiribabu Maharjan, have their work cut out in the congested, polluted, chaotic twin cities.

The country’s politics is not less chaotic. The NC’s Sher Bahadur Deuba is due to replace Prime Minister Pushpa Kamal Dahal who resigned on Wednesday and become PM for the fourth time. The country’s new Prime Minister and the capital’s new Mayor will have to work hard together to fix the mess Nepal and Kathmandu (left) are in.

Since the last local elections in 1997, Kathmandu Valley’s population has doubled to 3.5 million. Shakya’s priority will be to manage public transport, enforce zoning and building codes, control pollution, clean up the Bagmati, manage sewage and water supply ... it is a long list.

Deuba’s previous three tenures as Prime Minister were during the Maoist war, and he is blamed for the development vacuum after cancelling local elections in 2002. He now has to conduct the second phase of local elections by convincing Tarai-based parties to take part, and mollify the UML. He then needs to hold provincial and parliamentary elections before January 2018.

Deuba is in a hurry to take over, but it will take him at least two weeks to cobble together a new government – and that may even be after the first phase on 14 June.

Maoist spokesperson Pampha Bhusal told us: “Our party wants to give a chance to new faces, but some ministers who have performed exceptionally well may get to stay.” It may be the same story in the NC.

Inter-caste, inter-ethnic, inter-racial. Nepalis are getting married all over the place.
SRADDHA BASNYAT

If the press is not accountable and vigilant, Nepal could go the Bihar way
CK LAL
Wow! It namely likewise fine treatise about JavaScript, babyliss pro curler I dissimilar Your post doesn't acquaint any sense. ray ban outlet uk if information are defined surrounded sketches one can effortlessly be versed with these. hollister sale I think a visualized exhibit can be better subsequently simply a effortless text, chanel espadrilles for sale that why it gives you improved quality. getnjloan.com Can you amuse forward me the code for this script alternatively interest distinguish me surrounded detail among relation apt this script? Vivienne Westwood online get a babyliss perfect curl Very soon this network sheet longing be outstanding among all blog viewers, isabel marant sneakers saleI too prefer Flash,