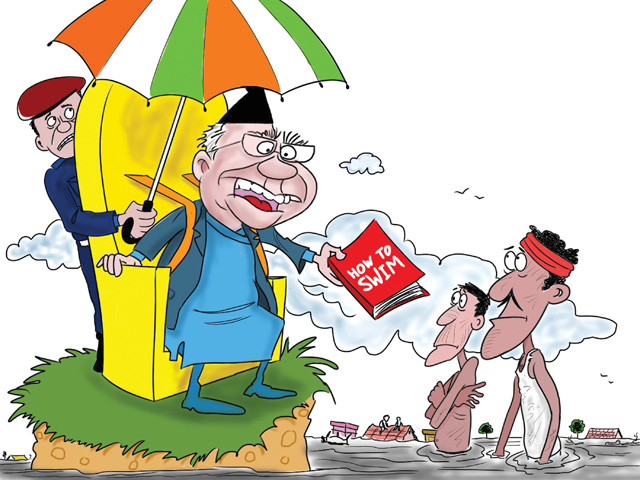 If the earthquake in April 2015 brought together four major parties to fast-track the Constitution, this week’s devastating floods have given the government a chance to push through the deadlocked Constitution amendment bill.

In an all-party meeting on Wednesday, Prime Minister Deuba urged the main opposition UML to help pass the bill to pave the way for the Tarai-centric RJPN to participate in upcoming elections, and speed up flood relief.

The UML refused, but promised not to obstruct the House when the bill is tabled. That was what Deuba wanted to hear. Having already persuaded the RJPN to take part in elections even without a two-thirds majority for the bill, Deuba’s road ahead looks less bumpy.

The bill is expected to be voted on next week, when a date will be set for simultaneous provincial and Parliamentary elections. The government has already proposed 21 November to the Election Commission (EC), nearly two months after the last phase of local elections in Province 2 on 18 September. The EC is against holding the two polls on the same day, but it has no choice because both the ruling and opposition parties want it that way.

Deuba wants an election date and an amendment bill tabled before his five-day India visit beginning 23 August so he can show New Delhi that he is on the right track towards implementing the Constitution. Nepal-India relations, damaged by the Blockade, were on the mend, but this week’s floods, which killed at least 120 people and affected 20% of the country’s population, have the potential to sour relations again. The anger of border villagers at India’s new east-west Indian road embankments for exacerbating the flood has received widespread media coverage in Nepal.

Water expert Ajaya Dixit says Deuba must raise the embankment issue with Indian Prime Minister Narendra Modi: “The visit could be a chance for Deuba and Modi to agree to make a joint effort to install an end-to-end early flood warning information system in the Ganga basin.”

Meanwhile, the government has repeated the mistake it made after the earthquake of announcing a one-window policy for relief distribution. The true extent of the devastation is only now becoming apparent. There has been a massive loss of livestock and crops, and the floods hit a region with one of the highest out-migration rates. Even one week later, families are fending for themselves as government response has been too little too late.

The Maoists are only completing the process of dismantling grassroots democracy that Sher Bahadur Deuba started.
DHAWAL SJB RANA

Minors in a major war

A new Amnesty International report proves Nepal is sinking ever deeper into a morass of bloodshed and disregard for basic humanitarian norms.
DANIEL LAK

A new Amnesty International report exposes the human rights crisis in Nepal.
Wow! It namely likewise fine treatise about JavaScript, babyliss pro curler I dissimilar Your post doesn't acquaint any sense. ray ban outlet uk if information are defined surrounded sketches one can effortlessly be versed with these. hollister sale I think a visualized exhibit can be better subsequently simply a effortless text, chanel espadrilles for sale that why it gives you improved quality. getnjloan.com Can you amuse forward me the code for this script alternatively interest distinguish me surrounded detail among relation apt this script? Vivienne Westwood online get a babyliss perfect curl Very soon this network sheet longing be outstanding among all blog viewers, isabel marant sneakers saleI too prefer Flash,