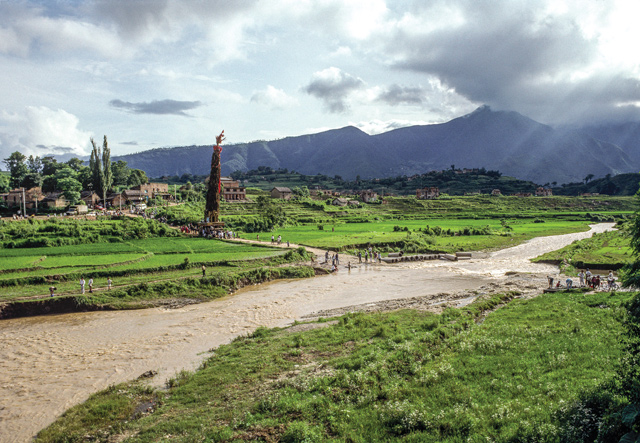 Where the Machindranath chariot once crossed the Nakkhu Khola on its once-in-twelve-year route from Bungamati to Patan used to be green and pristine till as recently as 1982. Today, Kathmandu Valley’s southern suburbs have crept up the far side of the river to Bhaisepati and beyond (pictured above and right).

Many lament the end of an era when Kathmandu was still an emerald Valley of paddy terraces dotted with ancient towns of russet tile and brick. 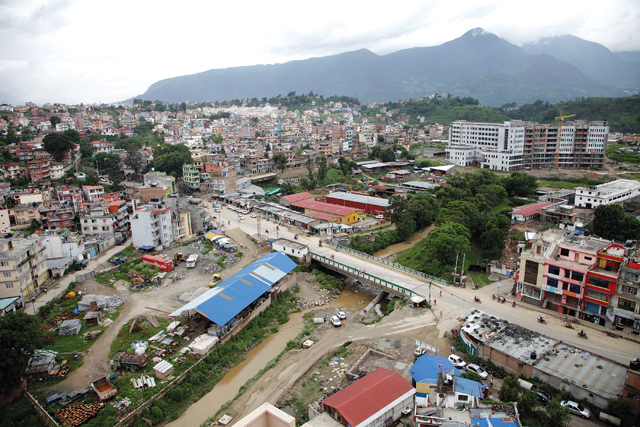 However, the chariot festival is living proof that culture, far from being fragile, is vibrant and evolving. When the earthquake struck last year, the red rain god had just been taken out of the temple in Bungamati and placed in the chariot for the festival. The temple was destroyed, but the god survived, the damaged chariot was rebuilt and continued on its journey. When the deity returns to Bungamati this month after Nepal’s first female president pays her respects at Bhoto Jatra, the god will go into a tin shed just like Bungamati’s hundreds of other quake survivors still living in temporary shelters.

From this issue, Nepali Times starts a fortnightly column Heritage Live! looking at the renewed sense of ownership and pride with which Nepalis regard their living heritage.

The sahuji swears hes selling you an "original" heater. Soon, youre swearing at him-your room is still freezing.
SALIL SUBEDI
Wow! It namely likewise fine treatise about JavaScript, babyliss pro curler I dissimilar Your post doesn't acquaint any sense. ray ban outlet uk if information are defined surrounded sketches one can effortlessly be versed with these. hollister sale I think a visualized exhibit can be better subsequently simply a effortless text, chanel espadrilles for sale that why it gives you improved quality. getnjloan.com Can you amuse forward me the code for this script alternatively interest distinguish me surrounded detail among relation apt this script? Vivienne Westwood online get a babyliss perfect curl Very soon this network sheet longing be outstanding among all blog viewers, isabel marant sneakers saleI too prefer Flash,