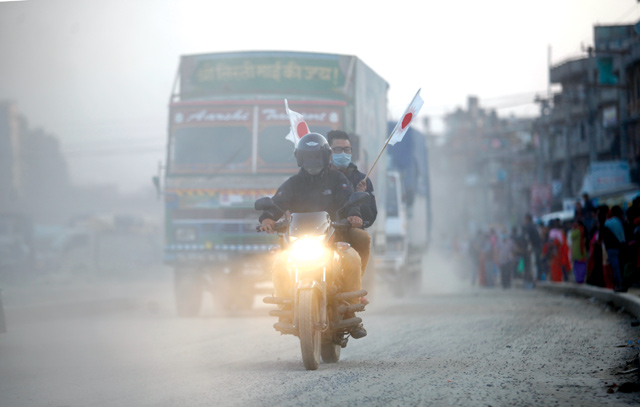 A smartphone survey last month ranked what Kathmandu’s long-suffering residents are most worried about: air and water pollution topped the list, followed by health and education.

For the first time in 19 years, the municipalities of the three main cities in the Valley will have a chance to vote for representatives to Wards and Municipal Councils to try and fix these problems. It will not be an easy task, and some candidates have been making wildly unrealistic promises of underground metrorails and flyovers. Tired of established parties botching it over and over again, voters seem to be attracted to younger candidates of alternative parties like Sajha, Bibeksheel and New Force, who are riding the social media wave to promise cleaner cities and more efficient local government.

In the rest of Nepal there was a political vacuum at the local level after the Maoists killed and threatened local leaders, and then in 2002 the royal regime cancelled local elections. This led to 15 years of plunder of rivers, mountains and forests by a mafia enjoying political protection. Worryingly, this time candidates for many of the Village and Municipal Councils are tainted figures trying to get elected to powerful local self-government units.

“There was no accountability, and corruption became part of grassroots governance,” laments Krishna Prasad Sapkota in our Guest Editorial on page 2. “Finally we have a chance to revive inclusive grassroots democracy.”

This election is important because for the first time Nepalis will be voting not for VDCs and DDCs, which were just local administrative units, but for Ward, Village, Municipal and Metropolitan councils that are empowered to make laws, raise revenue and fix policy. There are also quotas for women and Dalits, and although more than 90 per cent of candidates to head local councils are men, parties are obliged to nominate a woman for one of the two senior local posts.

Preparations for the much-delayed elections were hurried because of the deadlock over the Constitution. A compromise to hold it in two phases has its own dangers. But this election, with all its flaws, is of symbolic importance because it finally brings the new Constitution into force.