“We cannot change federalism, but we can change leaders” 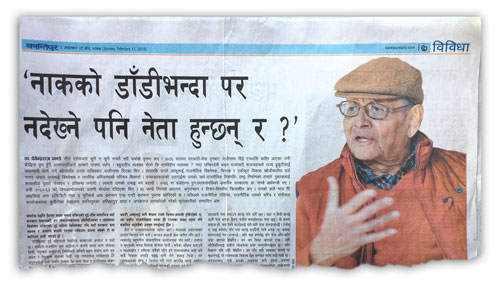 Devendra Raj Pandey has been in the limelight for the past 30 years after suddenly resigning from the Panchayat civil service in 1980. He spoke to Hari Bahadur Thapa and Janakraj Sapkota of Kantipur. Translated excerpts:

Kantipur: Two months have passed since elections, we don’t have a new government.

Pandey: It has been a long time since our hopes and confidence have been dashed, that the leadership would step up to its responsibilities, and that politics would move in a certain direction. Despite this, we have to hope for the best.

Is the delay because the incumbent government doesn’t want to step down, or because that is the way the constitution was written.

I often ponder that, too. But whatever the constitution says, we should have followed certain democratic norms and values. According to this logic, the winning party forms the government and the losing party sits in the opposition. But it even looks like the parties that won a majority are not getting together to claim leadership. This is a bit strange.

So, does that mean that the parties did not foresee this possibility?

It may be that because the debates about Madhesi and Janajati rights, or delayed earthquake relief prompted the government to act in a hurry. The leaders were also not competent: we have been seeing their ethical and moral behavior and their misuse of the budget. There is also a tendency among the leaders to reward sycophantic behaviour, and not listen to expert advice. B P Koirala used to call in all kinds of people to debate issues. Aside from some exceptions we don’t see that now.

But we have not seen a change in leadership style despite political transformations.

Parties need an organisation to back them, there must be an ideology, principles and vision. They need a leader to steer them with a long-term plan, which we lack.

It looks like our foray into federalism is spreading despair rather than hope.

What happens at the centre will affect the local level. We are all part of the same society. And then, those who fought for republicanism and federalism are on the outside. And those who think federalism will ruin Nepal or who doubt republicanism are leading the country. The Maoists have also fallen from grace: there isn’t much difference between them and the other parties. There is still a lack of understanding of the kind of state structure that was being formed.

Is there any reason to be hopeful about federalism?

Not at the rate we are going. The leadership is not a result of federalism: it is because of the leadership that we have federalism. We cannot change federalism, but we can change the leaders. How can you have effective decision-making if even the privileged class finds it has to latch on to a party to secure its future? Civil society has also become weak. Transformation needs a spark, I haven’t seen civil society in the past 10-12 years. Where is the spark?

You have just written a book on governance and corruption. What is your conclusion?

We have made a lot of laws in the past 20 years, but there is a lack of integrity in the state structure. I have included examples of other countries. There isn’t just one reason for the rise in corruption. There has to be all-around reform, but it must start with the leadership.

Let’s save the king

The people need democracy, but the king needs it even more.
CK LAL

Good intentions without logical direction can spell disaster.
ALOK K BOHARA
Wow! It namely likewise fine treatise about JavaScript, babyliss pro curler I dissimilar Your post doesn't acquaint any sense. ray ban outlet uk if information are defined surrounded sketches one can effortlessly be versed with these. hollister sale I think a visualized exhibit can be better subsequently simply a effortless text, chanel espadrilles for sale that why it gives you improved quality. getnjloan.com Can you amuse forward me the code for this script alternatively interest distinguish me surrounded detail among relation apt this script? Vivienne Westwood online get a babyliss perfect curl Very soon this network sheet longing be outstanding among all blog viewers, isabel marant sneakers saleI too prefer Flash,