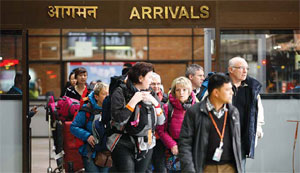 BIKRAM RA
Strikes called by the opposition parties in April have led to cancellations by tour groups at the start of the spring peak season.

The Maoist-Madhesi parties have called a four-day general strike beginning 6 April, coinciding with the onset of the trekking and tourism season. Fear and uncertainty have led to cancellations in bookings of hotel rooms, tours and treks.

The Maoist-Madhesi parties have warned an indefinite nationwide shutdown to protest the deadlock in the constitution making process and the attempt by the ruling coalition to push through with a vote in the Constituent Assembly, where they have a majority.

Weeks of protests, strikes and shutdowns have been called at a time when Nepal’s tourism industry is just beginning to make a comeback. New investments in tourism infrastructure are being made, with 20 new five-star hotels and casinos coming up. More than half a dozen new airlines are starting flights to Kathmandu but political instability is likely to deter investors from stepping into Nepal’s tourism sector.

As recently as in 2011, when Nepal Tourism Year was celebrated, political parties put it in writing that they would not call for strikes in the future. But they never kept their promise. As a result, the flow of tourists into Nepal has been declining since 2011 and numbers were down 5 percent to 588,000 in 2014 compared to 2013. The number of tourists is expected to decrease further in 2015.

The HAN’s Executive Director Pravesh Aryal says political instability is causing further damage to Nepal’s tourism industry that was already hit hard by the European Union’s black-listing of Nepali airlines. “This year’s crisis could affect tourism sector till next year,” he said.

Nepal Mountaineering Association (NMA)’s president Ang Tsering Sherpa urged political parties to understand the economic cost of strikes and shutdowns. He said: “The timing is wrong, the strike come during the peak trekking and mountaineering season.”

Editorial in Arthik Abhiyan, 8 January
Wow! It namely likewise fine treatise about JavaScript, babyliss pro curler I dissimilar Your post doesn't acquaint any sense. ray ban outlet uk if information are defined surrounded sketches one can effortlessly be versed with these. hollister sale I think a visualized exhibit can be better subsequently simply a effortless text, chanel espadrilles for sale that why it gives you improved quality. getnjloan.com Can you amuse forward me the code for this script alternatively interest distinguish me surrounded detail among relation apt this script? Vivienne Westwood online get a babyliss perfect curl Very soon this network sheet longing be outstanding among all blog viewers, isabel marant sneakers saleI too prefer Flash,