Radheshyam Adhikari in Kantipur, 8 May 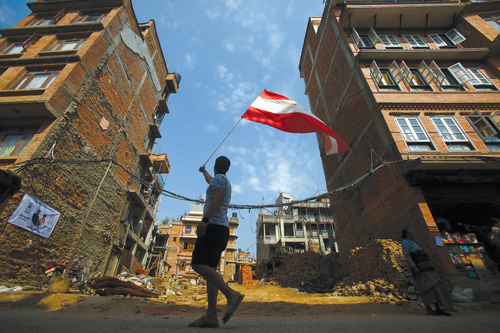 The new year has brought a silver lining in the form of local elections. Public opinion is firmly in support of defending the role of the judiciary. Voters have put political parties on notice. This is no longer the prerogative of the elite, but the concern of the wider citizenry, which is a good thing for democracy.

Local elections are taking place because the people want them. Nepalis have long felt the absence of local polls: services and development both suffered. The basic level of democracy, which allows people access to government, did not exist for 15 years. Unelected bureaucrats and local movers and shakers monopolised decision-making. There is great anticipation about the elections.

The Chief Justice of the Supreme Court was ambushed guerrilla style by an impeachment motion in Parliament. It became an issue that directly affected ordinary Nepalis, one that was not confined to the halls of Parliament. Those behind the impeachment move should have proven that it was the proper thing to do, not just to Parliament but to the people, who want answers. The proponents are becoming defensive, and civil society has united against the move.

This proves that Nepali democracy has become more resilient. Democracy gains strength after facing threats like these. Debate on the doctrine of the separation of powers is no longer confined to experts of constitutional law, but is held in households across the country. When the people stand up to support the pillar of an independent judiciary, it becomes stronger.

This puts added responsibility on the shoulders of all those who play a role in the judiciary. There have been many cases in the past where mistakes have been made, but there is no alternative to an independent and free judiciary: that is the message that has spread across the country in the aftermath of the impeachment motion.

The parties are busy campaigning, but also forging alliances across party lines. It remains to be seen how voters will take this. However, if it indicates that there is now more tolerance in politics then it must be seen as a good thing. Established parties have another challenge from new groups like the Sajha Party and Bibeksheel Nepali. We will see how well they do at the ballot box, but the very fact that they can affect the elections will prove that they are needed.

If it is true that through the Internet and social media younger citizens are being attracted to vote, this can only provide more energy to our democracy. All such encouraging trends are positive and prove that there is a silver lining to our democracy.

Our neighbour is an opportunity not a threat
ARTHA BEED
Wow! It namely likewise fine treatise about JavaScript, babyliss pro curler I dissimilar Your post doesn't acquaint any sense. ray ban outlet uk if information are defined surrounded sketches one can effortlessly be versed with these. hollister sale I think a visualized exhibit can be better subsequently simply a effortless text, chanel espadrilles for sale that why it gives you improved quality. getnjloan.com Can you amuse forward me the code for this script alternatively interest distinguish me surrounded detail among relation apt this script? Vivienne Westwood online get a babyliss perfect curl Very soon this network sheet longing be outstanding among all blog viewers, isabel marant sneakers saleI too prefer Flash,