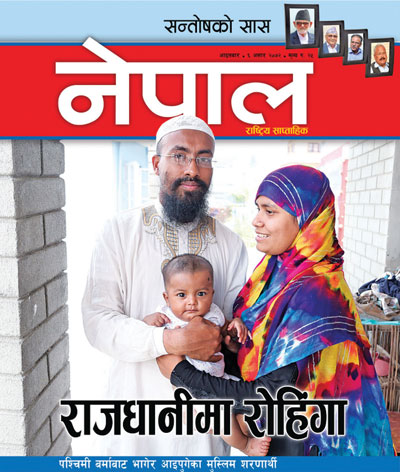 After crossing over into Bangladesh on a boat from Burma, 28-year-old Amir Hussain and his family came to Kathmandu via India in 2012.

Hussain and his family are among thousands of Rohingya who fled Burma after anti-Muslim attacks in parts of the western Rakhine state. The plight of Rohingya ‘boat people’ is making headlines in Thailand, Malaysia and Indonesia.

When the group first reached Kathmandu, they didn’t know anybody. They first stopped at Jame Masjid, one of the city’s oldest mosques, from where they were advised to go the office of the UN High Commission for Refugees (UNHCR). Although the UNHCR agreed to provide shelter to women and children the refugee families decided to stay at a cheap hotel in Bag Bazar because they didn’t want to leave their children. Today, Hussain and his family share a four-room flat in Kapan with two other Rohingya families. Each occupies a single room, and uses the empty room for namaz prayers.

Rafik Alam and his family were separated during their escape. Only after he was issued a refugee certificate from the UNHCR did Alam learn of his wife and children’s whereabouts. However it took Alam more than a year to reunite with his family in Bangladesh.

“My wife was pregnant when I lost her, she was brave enough to deliver the baby and bring them to Bangladesh on her own,” he says. “In Kathmandu we face a lot of problems but at least we do not have to fear for our lives.”

Before the riots erupted three years ago, Myanmar was home to some 800,000 Rohingya people. International reports show that 120,000 of them have since left the country. A citizenship law enacted in 1984 termed the Rohingya stateless immigrants from Bangladesh. As a result, they were not eligible for government jobs, or to apply for basic services.

But the real tragedy for the Rohingya began in 2012 as Burma embarked on the path to democracy, and the persecution by the majority Buddhists is driving the Rohingya refugee crisis.

Maoist vice-president Baburam Bhattarai, the most likely consensus prime ministerial candidate spoke to Nepali Times on Thursday about the formation of a national unity government and progress on the peace process. Excerpts:
Wow! It namely likewise fine treatise about JavaScript, babyliss pro curler I dissimilar Your post doesn't acquaint any sense. ray ban outlet uk if information are defined surrounded sketches one can effortlessly be versed with these. hollister sale I think a visualized exhibit can be better subsequently simply a effortless text, chanel espadrilles for sale that why it gives you improved quality. getnjloan.com Can you amuse forward me the code for this script alternatively interest distinguish me surrounded detail among relation apt this script? Vivienne Westwood online get a babyliss perfect curl Very soon this network sheet longing be outstanding among all blog viewers, isabel marant sneakers saleI too prefer Flash,