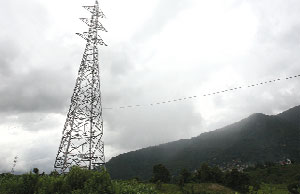 The government has said it will take action against individuals and groups opposing infrastructure development. In his budget speech on Sunday, Finance Minister Ram Sharan Mahat announced a special program to deal with those who create obstructions to energy, hydroelectricity, and infrastructure projects.

Acquiring land for transmission lines and highway has become a big problem in the past few years and projects of national pride have been delayed. Various individuals, political parties, and ‘development’ organisations have obstructed hydropower and infrastructure projects. The construction of transmission lines sections in Thankot-Bhaktapur and Khimti-Dhalkebar, the Kathmandu-Tarai fast-track, and North-South highways have been delayed for years because of disagreements over property evaluation.

The government will now be able to take legal action against those who delay national international obstruction on any ground. There are plans to draft a law that will deal with land acquisition and property evaluation. The government will also amend the Environment Conservation Act so that pending projects will soon be able to begin their Environmental Impact Assessments.

Mahat has allocated Rs 26.17 billion for the energy sector. He also announced load-shedding would end in the next three years because projects like the Upper Tamakosi, Trisuli IIIA, Chameliya and Kulekhani III would get special provisions in the budget.

Mahat also said the private sector would get subsidies for investment in hydropower. Private companies that complete construction in the next nine years will be exempted from income tax for 10 years and will have to pay only half the total income tax for the next five years.

The budget has set aside Rs 26 billion for infrastructure development. It has special provisions for a detailed project report for the Kathmandu-Tarai fast track to be completed within six months. It has allocated money to open up the tracks for the Mid-Hill Highway and also construct 20 bridges on it. Money has been set aside to connect Dolpa and Humla by road. More than 525km new road will be pitched and 498km gravelled in the next 12 months while 227km new dirt tracks will be opened up.

Regardless of how Surya Bahadur Thapas effort to provide an enduring liberal democratic character to the RPP plays out, you cant ignore his robust record.
PUSKAR BHUSAL
Wow! It namely likewise fine treatise about JavaScript, babyliss pro curler I dissimilar Your post doesn't acquaint any sense. ray ban outlet uk if information are defined surrounded sketches one can effortlessly be versed with these. hollister sale I think a visualized exhibit can be better subsequently simply a effortless text, chanel espadrilles for sale that why it gives you improved quality. getnjloan.com Can you amuse forward me the code for this script alternatively interest distinguish me surrounded detail among relation apt this script? Vivienne Westwood online get a babyliss perfect curl Very soon this network sheet longing be outstanding among all blog viewers, isabel marant sneakers saleI too prefer Flash,