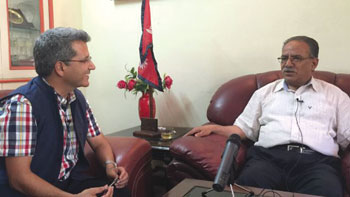 BBC Nepali Service: The 16-point deal failed to determine names and boundaries of federal provinces, how can you expect a commission to accomplish this task, something 601 members of the Constituent Assembly failed to do?**

Pusha Kamal Dahal: I think you are biased. The situation is different now. The mistakes we made in the past will not be repeated.

Some members of the 30-party alliance oppose the deal.

I think they have failed to understand the ground reality. The 16-point deal is the conclusion of a political course which began after we signed the 12-point agreement in 2005. Even at that time, we had compromised on our stand. It is always an act of give and take. More than 90 per cent of people support the agreement.

Not long ago, your party had dubbed UML Chair KP Oli a ‘retard’? What changed?

Everyone knows there are no permanent friends or permanent enemies in politics.

So, Oli is mentally healthy now?

Why do you interpret the remark literally? That was just symbolic. Besides, we were getting back at Oli for calling us names. If he starts talking positive about us, why would we be negative about him?

Will you back Oli as the new Prime Minister?

Prime Minister Sushil Koirala has publicly said that he will resign after the new constitution is written. So, the chair of the second largest party will obviously become the new Prime Minister. But we have yet to make a formal decision since we are focusing on the constitution.

Will your party join the new government?

We are for a national unity government. But whether to join the new government will depend on how the NC-UML approach us.

What is your personal future plan?

My dream was to write a progressive constitution. I think I am now closer to fulfilling my dream. I now want to use my time and energy for the country’s economic prosperity.

But you are unlikely to assume executive power, how can you contribute to the country’s economic growth just as a political party leader?

But the UCPN (M) is a distant third party, and pressure is building up on you to step down as the party chair.

So, you do not want to become President?

In this political situation, I do not want to become a president. Having written a note of dissent for an executive president, it would not be appropriate.

Will you accept Sushil Koirala as the new president?

I clearly told NC and UML leaders that I was not eying the post of new president. It is up to the NC to decide who will become the new president. If it wants to continue with Ram Baran Yadav, we will have no problems. If it wants Sushil Koirala that is also fine. It was because I clarified that our party did not want the presidentship that the 16-point agreement was possible.

Public lynchings, campus shootouts. What next?

Mob psychosis is taking over the country
MALLIKA ARYAL
Wow! It namely likewise fine treatise about JavaScript, babyliss pro curler I dissimilar Your post doesn't acquaint any sense. ray ban outlet uk if information are defined surrounded sketches one can effortlessly be versed with these. hollister sale I think a visualized exhibit can be better subsequently simply a effortless text, chanel espadrilles for sale that why it gives you improved quality. getnjloan.com Can you amuse forward me the code for this script alternatively interest distinguish me surrounded detail among relation apt this script? Vivienne Westwood online get a babyliss perfect curl Very soon this network sheet longing be outstanding among all blog viewers, isabel marant sneakers saleI too prefer Flash,