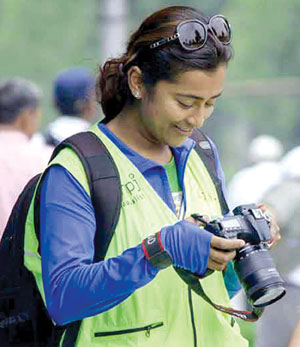 I woke up on 20 January to news about an attack on a vehicle carrying newspapers in Siraha. I put on the fluorescent green jacket worn by photojournalists and hung my press card around my neck so I could easily be identified as a reporter. I slung my camera over my shoulder and left home on my scooter. The roads were fairly empty early morning. Riot police guarded the restricted area near the CA building. Led by UCPN (M) leader Hisila Yami, a group was trying to force its way towards New Baneswor. Clad in a t-shirt with a large Nepal’s flag emblazoned on it, Yami was shouting slogans. I clicked some pictures and tried to move forward, but the crowd assulted me. One of them tore up my media ID, and started hitting my scooter. I kept quiet as they verbally abused me. Two other journalists were also manhandled in front of Yami. Later I went back and identified my attacker as ex-YCL Rajan Gautam from Nuwakot and murder convict. Risk is inherent for reporters, but I felt sad for the future of my country.

Can you force your Chairman from taking his grand-daughter out of her private school? Bet not.
DAMAKANT JAYSHI

The Annapurna 100 ultra race was a fitting kick off for Nepal Tourism Year 2011
Wow! It namely likewise fine treatise about JavaScript, babyliss pro curler I dissimilar Your post doesn't acquaint any sense. ray ban outlet uk if information are defined surrounded sketches one can effortlessly be versed with these. hollister sale I think a visualized exhibit can be better subsequently simply a effortless text, chanel espadrilles for sale that why it gives you improved quality. getnjloan.com Can you amuse forward me the code for this script alternatively interest distinguish me surrounded detail among relation apt this script? Vivienne Westwood online get a babyliss perfect curl Very soon this network sheet longing be outstanding among all blog viewers, isabel marant sneakers saleI too prefer Flash,