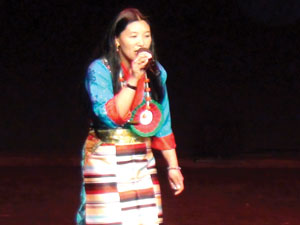 Although Sherpas are synonymous with mountaineering, Pemba has made her community well known in Europe for singing talent as well. Originally from Solu Khumbu Pemba Sherpa has brought out several albums in Nepali and Sherpa language and makes it a point to visit Nepal at least once a year to do her recordings here.

Pemba didn’t stop singing when she moved to Europe. Now living in Spain, her popularity has spread far and wide, and she is the star attraction in shows in Germany, France, Portugal, Belgium and other European countries.

It’s great that I can actually make a living with my singing career even in Europe,” says 38-year-old Pemba. “It helps that there is a sizeable Nepali community in European countries.”

Having trained under the tutelage of music gurus Sambdev Sapkota, Shila Bahadur Moktan and Chandan Shrestha, Pemba’s popularity is now so great no program organised by Nepalis in Europe is complete without her singing presence.

Says Pemba: “People find it strange that a Sherpa can also sing, and that has provided encouragement for me.”

James Moriarty, US ambassador to Nepal

All is quiet on the western front, but for how much longer?
Wow! It namely likewise fine treatise about JavaScript, babyliss pro curler I dissimilar Your post doesn't acquaint any sense. ray ban outlet uk if information are defined surrounded sketches one can effortlessly be versed with these. hollister sale I think a visualized exhibit can be better subsequently simply a effortless text, chanel espadrilles for sale that why it gives you improved quality. getnjloan.com Can you amuse forward me the code for this script alternatively interest distinguish me surrounded detail among relation apt this script? Vivienne Westwood online get a babyliss perfect curl Very soon this network sheet longing be outstanding among all blog viewers, isabel marant sneakers saleI too prefer Flash,