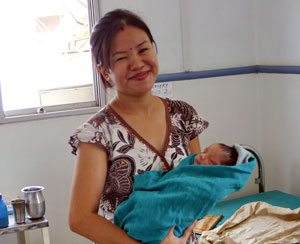 The roof leaks, the walls are cracked. Rats, cats and snakes go in and out through holes. This is the Lumbini district Hospital built 60 years ago and that treats patients from 19 surrounding districts. “It is like a cow shed,” admits the hospital’s communication officer, Laxmi Regmi. A study last year by the WHO put this on the list of top ten hospitals in Nepal most in danger of collapse during an earthquake. The hospital had proposed a new building with 500 beds and surgery unit at the cost of Rs 800 million, but it is stuck in the Health Ministry because of the lack of political will.

In Taulihawa of Kapilbastu, the 15-bed district hospital should have expanded services, but it has now shrunk to being no more than a primary health care centre that treats diarrohea and pneumonia cases. The hospital was built with Indian assistance 50 years ago, today all it does is ‘refer’ patients to other hospitals. The facility has the budget, doctors and physical infrastructure, what it doesn’t have is management and political will to run it. The x-ray machine is broken, there are no antibiotics to treat TB patients, the toilet in the outpatient ward stinks, the recovery ward is rundown.

Bhim Hospital in Bhairawa was built 80 years ago and named after Rana prime minister Bhim Sumshere. It has allotment for six doctors, but for the past month there is not a single doctor here. The presence here of the Lumbini Zonal Hospital and private hospitals means that there is no public pressure or political accountability to improve the hospital. The well-to-do take their relatives to Kathmandu or to India, the poor are forced to go to expensive private hospital because the government facility that is supposed to provide free care doesn’t have doctors.

Bharatpur is being developed as a ‘medical city’, Birganj has the Narayani Regional Hospital and in between the 51-year-old Hetauda Hospital with 50 beds, has fallen between the cracks. There are supposed to be 15 doctors here, but there are only two, which means even patients with simple ailments have to go to Birganj or Bharatpur. There is a shortage of anaethesiologists which has affected surgeries.

In neighbouring Nawalparasi, one-third of the medical staff is missing in the Prithvi Chand Hospital. Interns are holding the fort, and for one year no one heads the hospital development board. A building donated by the Indian Embassy hasn’t been handed over yet. It is the same situation in two government hospitals in Rautahat, patients in Gaur and Chandranighapur are forced to go to private clinics because there are no doctors. The hospitals have allotments for three doctors, one medical superintendent and one medical officer – none of them are present.

Meanwhile, in Bharatpur Hospital there are 300 patients a day and there just aren’t enough beds for everyone and patients have to sleep on the floor. When there is a highway accident, the number of patients swells. There are 415 beds, but there is always a shortage of beds. Last year, the hospital treated 180,000 patients. The development committee wants to expand the 60-year-old hospital to 500 beds to cater also to patients from Hetuada and Birganj.

For more than 50 years, Nepali students have benefited from the worlds most successful educational exchange.
Wow! It namely likewise fine treatise about JavaScript, babyliss pro curler I dissimilar Your post doesn't acquaint any sense. ray ban outlet uk if information are defined surrounded sketches one can effortlessly be versed with these. hollister sale I think a visualized exhibit can be better subsequently simply a effortless text, chanel espadrilles for sale that why it gives you improved quality. getnjloan.com Can you amuse forward me the code for this script alternatively interest distinguish me surrounded detail among relation apt this script? Vivienne Westwood online get a babyliss perfect curl Very soon this network sheet longing be outstanding among all blog viewers, isabel marant sneakers saleI too prefer Flash,