Lives of our brothers

Profiles of some of the 13 Nepalis killed in Monday’s bombing in Kabul. Annapurna Post, Rajdhani, Kantipur, Nagarik 22 June 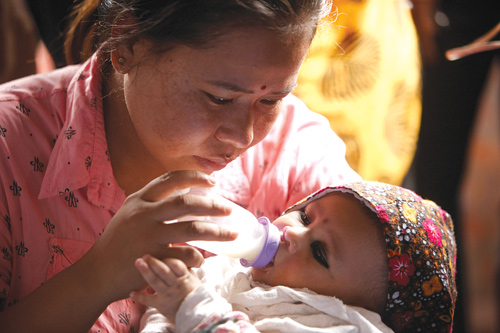 After retiring from the Indian Army, Jitendra Singh Thapa went to work in Iraq as a private security guard. His family members thought Iraq was too dangerous, and forced him to return home, but he subsequently convinced them to let him go to Afghanistan. The family thought Kabul was safer and did not put pressure on him to return. He came back on Wednesday, but in a pink wooden box. (His wife Sangita and four-month-old baby are pictured above.)

Madhu Sudan Koirala lost his son Sishir and daughter Swastika when last year’s earthquake destroyed their house. He could not attend their last rites because he was guarding the Canadian Embassy in Kabul after having retired from the Nepal Army three years earlier. Koirala’s wife and three remaining daughters moved to a rented room in Kathmandu.

He came to Nepal in April on the first anniversary of the earthquake, and observed the one-year memorial rites for his children. While in Nepal, he recorded a song: “My heart weeps … may such a tragedy not befall anyone.” He returned to Kabul because he needed to save money to rebuild his house in Nuwakot, and educate his surviving children. He was among the 13 Nepalis killed in Kabul in Monday’s Taliban bombing.

After surviving a deadly Maoist attack in Sindhupalchok in 2003 in which eight of his fellow soldiers were killed, Chandra Bahadur Rana Magar left the Nepal Army. He found a job as a private security guard in Kabul, and took a loan to buy a one-storey house in Kathmandu. After a holiday in Nepal, he had returned to Kabul in May. He died in the suicide bombing.

Nabin Singh Chhetri had been injured in a Maoist attack during the war. He left the Armed Police Force to open a shop in Kathmandu. When he found a job as a security guard in Kabul, his wife took over the running of the shop. At home on leave last month, Chhetri told his wife that his job in Afghanistan was too dangerous and he would soon return to Nepal. But before he could leave Kabul, he departed this world.

Ankur Moktan of Sunsari was in the bus in Kabul chatting with his wife on Facebook messenger. Minutes after he ended the conversation, the moving vehicle was blown up by a Taliban suicide bomber. Goma Gole, Akur’s wife, says: “He had promised to call me after he finished his duty shift, but that chat I had with him turned out to be our last conversation.”

Eduardo Lechuga Jimenez, Head of the EU Delegation in Nepal

"The sun is shining over Nepal"

Erik Solhem, Norwegian Minister for Development Cooperation also the architect of the Sri Lanka peace process
Wow! It namely likewise fine treatise about JavaScript, babyliss pro curler I dissimilar Your post doesn't acquaint any sense. ray ban outlet uk if information are defined surrounded sketches one can effortlessly be versed with these. hollister sale I think a visualized exhibit can be better subsequently simply a effortless text, chanel espadrilles for sale that why it gives you improved quality. getnjloan.com Can you amuse forward me the code for this script alternatively interest distinguish me surrounded detail among relation apt this script? Vivienne Westwood online get a babyliss perfect curl Very soon this network sheet longing be outstanding among all blog viewers, isabel marant sneakers saleI too prefer Flash,