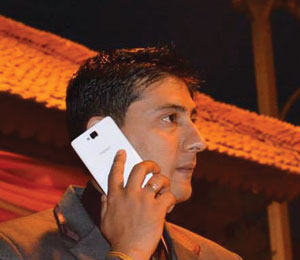 When Nepal Telecom (NTC) first introduced mobile phone service 15 years ago, one of the few lucky people to get a number was film director Prakash Sayami. At Rs 25,000, the SIM card cost Sayami more than the phone set, a stark contrast to the situation today where growth of telecom companies has made SIM cards cheap and easily available.

Although NTC began its GSM service in 2000, it was only after the entry of the private sector that mobile phones grew in popularity. Increasing competition between service providers and mobile brands has helped make mobile phones affordable and within the reach of every individual.

Compared to a decade ago when only 88,000 Nepalis carried a cell phone, today 20 million Nepalis own a mobile phone.

Mobile phones have now become a necessity, with the gadgets being used for more than just calling. Whether it is for sharing ‘selfies’ on Facebook or enabling farmers to know the market value and price of produce, mobile phones serve varied purposes. Introduction of smartphones and 2G and 3G services have further propelled its growth.

With around 42 Internet Service Providers there are increasingly more data usage than voice transfers. An estimated 8.9 million Nepalis use Internet, a third of whom access the net through their phones.

In Nepal, only 36 per cent of households have televisions, whereas 84 per cent of the population have phones. Every year around 3 million mobile phones worth Rs 10 billion are sold in Nepal. Nepalis are shifting to smart phones as they become cheaper but bar phones still make up 70 per cent of mobile sales. Trends show that customers here place higher value on the price than on brand.

If the quality of statistics in Nepal is dubious, then so are policies based on them
BISHNU DEV PANT
Wow! It namely likewise fine treatise about JavaScript, babyliss pro curler I dissimilar Your post doesn't acquaint any sense. ray ban outlet uk if information are defined surrounded sketches one can effortlessly be versed with these. hollister sale I think a visualized exhibit can be better subsequently simply a effortless text, chanel espadrilles for sale that why it gives you improved quality. getnjloan.com Can you amuse forward me the code for this script alternatively interest distinguish me surrounded detail among relation apt this script? Vivienne Westwood online get a babyliss perfect curl Very soon this network sheet longing be outstanding among all blog viewers, isabel marant sneakers saleI too prefer Flash,