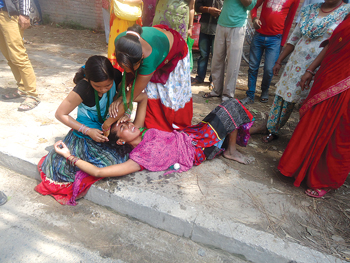 SANTOSH DAS
“Back home owners raped and scarred us for life and now in Kathmandu, the government is leaving us battered and bruised,” says one of the protesting kamlaris (girl-child indentured labourers).

On Sunday, women gathered outside Singha Darbar’s south gate to demand investigation into the mysterious deaths of kamlaris in the past year. Suddenly without warning, security forces baton-charged them. But even as the police got brutal, the women stood their ground as more joined in. Surprisingly there was not a single female police officer on duty to control the crowd of over a hundred kamlaris. Eight kamlaris had to be taken to hospitals, out of which four hadn’t gained consciousness even till late in the evening.

The women had come to the capital in hopes of getting justice for the mistreatment they suffer at the hands of their owners and organised a relay hunger strike in Shanti Batika, Ratnapark to make their voices heard. But since the state didn’t pay any attention, they began a sit-in in front of Singha Darbar.

“The government beat us up as if we were the culprits. This is not our government and the ministers aren’t our guardians,” states Urmila Chaudhary president of Kamlari’s Abolition Struggling Committee. Fakala Tharu who was present during the protests says that instead of addressing their demands and helping them, the state resorted to unnecessary force: “No matter how much force they use, we will continue to protest peacefully,” she claims.

Although the kamaiya system was officially abolished 13 years ago, it is still widely practiced in many of Nepal’s southern districts including Dang, Banke, and Bardiya and violence against the women is quite routine.

In the latest atrocities, 16-year-old Meghi Chaudhary from Kailali and 12-year-old Shrijana Chaudary from Dang were found dead under suspicious circumstances at the homes of their owners. Eleven kamlaris are missing so far. Yet there has been no arrests or investigation into any of the cases.

Miracles wont save us, a reality check will
CK LAL
Wow! It namely likewise fine treatise about JavaScript, babyliss pro curler I dissimilar Your post doesn't acquaint any sense. ray ban outlet uk if information are defined surrounded sketches one can effortlessly be versed with these. hollister sale I think a visualized exhibit can be better subsequently simply a effortless text, chanel espadrilles for sale that why it gives you improved quality. getnjloan.com Can you amuse forward me the code for this script alternatively interest distinguish me surrounded detail among relation apt this script? Vivienne Westwood online get a babyliss perfect curl Very soon this network sheet longing be outstanding among all blog viewers, isabel marant sneakers saleI too prefer Flash,