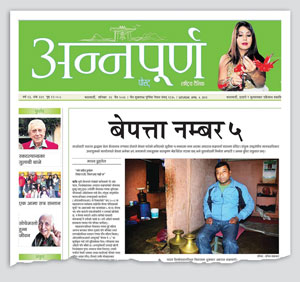 Out of the 49 people on a Office of the United Nations High Commissioner for Human Rights (OHCHR) Missing Persons list, Annapurna Post has tracked down several people, including Asta Raj Bajracharya. They are alive and well.

Under no circumstances whether during the war or otherwise, should a citizen’s rights be trampled upon. Violations should be investigated, perpetrators punished and victims compensated. It is expected that the Commission to Investigate Forced Disappearances and the Truth and Reconciliation Commission would create an objective and fear-free environment for peace and justice.

But it is clear from Bajracharya’s case that the United Nations and foreign embassies were actively involved in defaming the government and the Nepal army. The government should hold the UN and other diplomatic agencies accountable.

The OHCHR’s decision not to update its list even after Bajracharya was found to have not been disappeared and the British Embassy’s complicity makes the intentions of both institutions clear. Instead of updating the list, the UN wanted to create the illusion of his disappearance by sending him abroad.

Now that the cat is out of the bag, it is up to the government to belatedly ask both the OHCHR and the British Embassy for an explanation of their wartime roles.