“Now I can rest in peace” 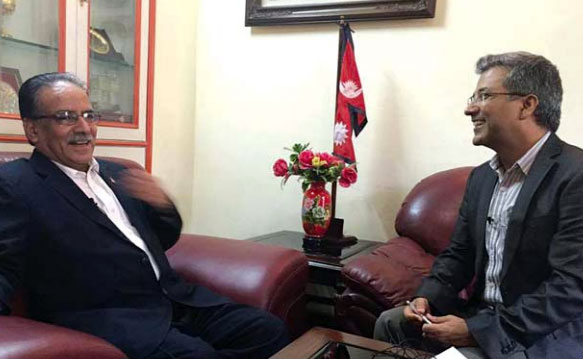 BBC Nepali: You have achieved almost all the objectives of the war – republicanism, constitution through Constituent Assembly, federalism and inclusion, what’s next for you?

Pushpa Kamal Dahal: I got very emotional when Constituent Assembly passed the new constitution. That night, when I reached home, my security officer cautioned me against going anywhere else but Singha Darbar, Baluwatar and New Baneswor. But I told him that I was no more afraid of dying. I can now rest in peace because the republic has been institutionalised, and Nepal has embarked on a new journey.

Nepal has undergone political transformation, but it still remains an underdeveloped country. Is your mission really over?

But this political transformation is a precondition for economic development.

You had recently told us that you would like to be in active politics for at least seven–eight years, in what capacity you want to contribute to Nepal in this period?

Yes, I think I should be active in politics for at least seven-eight years. I want to win the next elections, oversee creation of federal provinces and implement the constitution to expedite economic development.

Don’t you need to be Prime Minister to do all that?

I am not thinking about any posts right now. But I want to make it clear that our party will be a partner of the next coalition government.

So Baburam Bhattarai does not stand a chance to be the party president any time soon?

I have prepared a proposal on how the handover of the party leadership. For me to be in active politics, I do not necessarily need to be the party president. But it does not mean that I am ready to step down right away.

Bhattarai has vowed to form a new political force, has he told you anything about quitting the party?

His new political force is an old story, and I do not think he is quitting the party.  I am also surprised that a political leader of his stature is now publicly speaking and writing against the new constitution. I find it very unnatural.

That is perhaps because he is quitting the party?

If he quits the party, neither he nor the country will benefit from his action. I have put up with him for 30 years. No one has been as close to him as me. He has some qualities, but he is a complex character.

You publicly asked India to respect us if they want us to respect them, but what did you privately tell Indian special envoy S Jaishankar?

When I recently went to New Delhi, I told Indian Prime Minister Narendra Modi that we want to be a good friend of India, not a ‘yes man’. We love our country and so do they. I told everyone I met in New Delhi: Nepal can address India’s concerns as a good neighbour, but never as a yes man.

What actually transpired between you and Jaishankar?

He bluntly told me that India will not welcome the new constitution if everyone is not on board. He also said the new constitution will be meaningless without India’s endorsement, no matter how many countries welcome it. I just told him: your visit is ill-timed, and you should have come 15 days earlier or 15 days later.

How do you now deal with the Madhesi parties?

We have made a political resolution to address grievances of not only Madhesis but also Tharus and Janajatis by amending the constitution. We had to hurry up to promulgate it because further delay would lead to loss of whatever momentum we have. When I used to sit in one-to-one meeting with Madhesi leaders, they would tell me that they would not endorse the constitution fearing backlash from their constituencies, but they encouraged us to move forward.

Do you see a possibility of a separatist movement in the Tarai?

A group in the Tarai is definitely pushing for separatism, but it doesn’t have strong support from the Madhesi people. I am deeply convinced that the Madhesi people will never want to secede from Nepal. Their allegiance towards the Nepali nation state is very strong.

Do you think India will exacerbate political tensions in the Tarai?

I am a bit worried about that. When I met Indian Special Envoy Jaishankar he said the Tarai unrest could spread across the border to Bihar and Uttar Pradesh and India was deeply concerned about it. He kept uttering the word ‘border’. I told him: your concern is genuine, but it would be wise for India to think beyond its borders and to a broader Nepal.