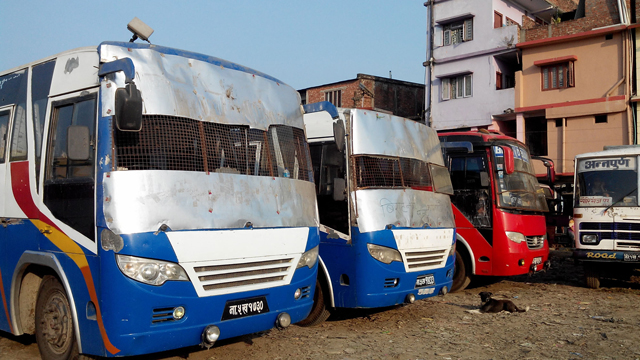 All photos: Kamal Rimal
Bus operators in Biratnagar have now taken to covering windshields with plywood and metal sheets for protection

On 7 December bus driver Umesh Thapa was driving from Dharan to Biratnagar when Madhesi Morcha cadres launched an attack on his passenger-filled vehicle at Hattimuda in Morang. Protesters broke the bus’ windshield, sending pieces of glasses flying into Thapa’s eyes. The driver also sustained injuries on his hand. 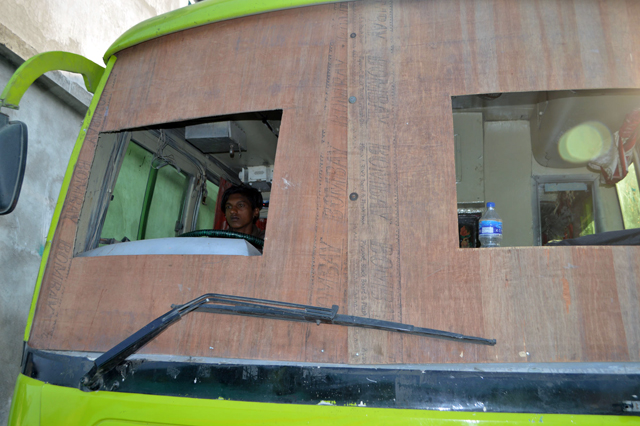 A week earlier on 27 November three passengers died and 26 others were injured in Bhardaha of Saptari district when a bus overturned as its driver made a sharp turn to avoid being attacked by protesters. 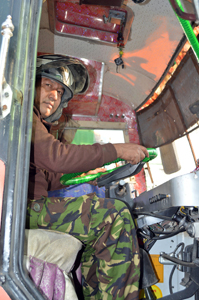 Almost all of the long-route buses traveling from Biratnagar have been vandalised by protesting Madhesis. Following these attacks, bus operators in the district have now taken to covering windshields with plywood and metal sheets for protection. Others have resorted to covering the entire body of buses with metal mesh.

"Driving a bus on this route is now equal to going to war," says Raju Dhamala, a bus operator. Some drivers like Shyam Thapa of Subhalaxmi Deluxe have even started wearing helmets to protect themselves from attackers.

Tarun National Weekly, 9 July
Wow! It namely likewise fine treatise about JavaScript, babyliss pro curler I dissimilar Your post doesn't acquaint any sense. ray ban outlet uk if information are defined surrounded sketches one can effortlessly be versed with these. hollister sale I think a visualized exhibit can be better subsequently simply a effortless text, chanel espadrilles for sale that why it gives you improved quality. getnjloan.com Can you amuse forward me the code for this script alternatively interest distinguish me surrounded detail among relation apt this script? Vivienne Westwood online get a babyliss perfect curl Very soon this network sheet longing be outstanding among all blog viewers, isabel marant sneakers saleI too prefer Flash,