Why is Myanmar’s general here? 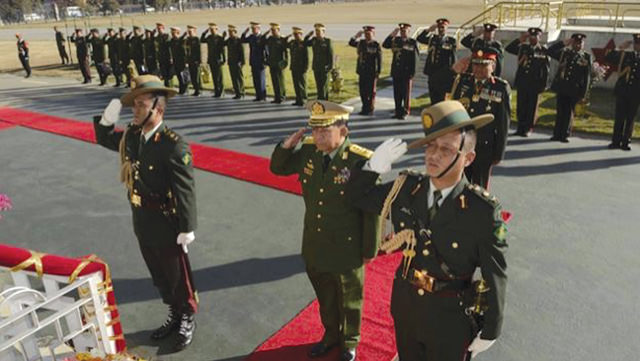 Myanmar’s army chief, who is accused of masterminding the ethnic cleansing of his country’s Rohingya people, is in Kathmandu on a four-day visit. The Nepal Army said he is here to study Nepal’s peace process, especially the demobilisation of the rebel fighters.

Several human rights activists have criticised the visit of someone accused of gross human rights violations, saying the timing is not right. However, Nepali officials maintain that the Rohingya issue is Myanmar’s internal affair unconnected with General Min Aung Hlaing’s visit to Nepal. Some 600,000 Rohingyas have fled Myanmar to Bangladesh since August, in what the United Nations has characterised as a ‘textbook case of ethnic cleansing’. This has brought widespread international criticism of Myanmar’s democracy warrior and Nobel Peace Prize winner, Aung San Suu Kyi.

“The visit exposes Nepal’s lack of adherence to its responsibility to uphold international law, and shows support for gross violations of human rights,” said activist Govinda Bandi. Other activists say Nepal should have been much more sensitive to the fact that it has just been voted into the UN Human Rights Council.

According to Nepal Army spokesman Nainraj Dahal: “This visit was solely intended to improve bilateral relations, and there has been no discussion at the level of the Nepal government or Nepal Army about the international reaction.” Former Nepal Army General Balananda Sharma, who has worked on the Myanmar peace process, agreed that Gen Haing’s visit should not be seen from the perspective of that country’s internal affairs.

Gen Sharma, who was in charge of the secretariat managing the integration of Maoist fighters into the Nepal Army, added: “They also need to end their 70-year insurgencies: it is good he is here to hear about our experience in the peace process.” Of the insurgent groups in Myanmar, the government has peace agreements with eight and efforts are on to bring 13 others into a truce.

This is not the first time that senior officials and political leaders of Myanmar have visited Nepal to meet the prime minister and politicians.

Nepali activists say officials here should alert Myanmar’s military personnel about the need to investigate war crimes. But others also say that the process of Myanmar’s efforts to ensure transitional justice should not be derailed by its Rohingya crisis.

The new constitution should guarantee rights over natural resources

Let the sun shine in

Going solar doesn't just make ecological sense, it also makes economic sense
SHRADHA BASNYAT
Wow! It namely likewise fine treatise about JavaScript, babyliss pro curler I dissimilar Your post doesn't acquaint any sense. ray ban outlet uk if information are defined surrounded sketches one can effortlessly be versed with these. hollister sale I think a visualized exhibit can be better subsequently simply a effortless text, chanel espadrilles for sale that why it gives you improved quality. getnjloan.com Can you amuse forward me the code for this script alternatively interest distinguish me surrounded detail among relation apt this script? Vivienne Westwood online get a babyliss perfect curl Very soon this network sheet longing be outstanding among all blog viewers, isabel marant sneakers saleI too prefer Flash,