Who will be a Nepali 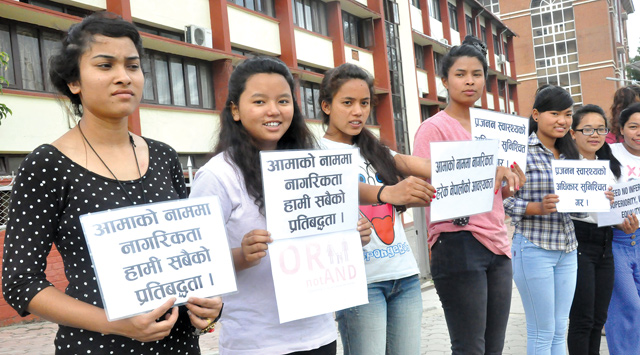 Despite such liberal provisions in the draft, there are misleading arguments that Nepalis have been denied the right to acquire citizenship through mothers’ names. If you argue that the children of a Nepali married to a foreigner and living in the country of their spouse should also be entitled to citizenship by descent, your logic cannot be valid.

If you argue that foreigners married to a Nepali man or a woman should be treated equally, will you accept a provision that requires female foreigners married to Nepali men to wait for a certain period (seven years for example) to be able to apply for naturalised citizenship?  To those who invoke international laws and practices to demand Nepali citizenship to foreigners, are you also ready to follow the same rules to manage our border and migration? Can international law practiced in one area not be applicable to another? If countries like India and the US consider barring those born elsewhere from reaching top executive posts, is it logical for Nepal to accept foreigners as heads of constitutional bodies and security forces?  It is unfortunate to see some people demanding the shortest possible way to grant citizenship to foreigners, by descent at that.

It would be wiser for Nepalis to discuss the citizenship issue as true nationalists. Vested interests and emotions do not bode well for Nepal’s sovereign existence. We need a constitution to protect our sovereignty, independence, unity, prosperity and welfare. We cannot allow a constitutional provision that jeopardises our national interest.

Many countries do not easily grant citizenship to foreigners. They just give Permanent Resident (PR) cards to immigrants. And when they apply for citizenship, they are required to take an oath and attend an orientation about the importance of citizenship. But Nepal does not have any of these provisions despite having to deal with some sensitive issues of population management. We share a long porous border with India, allowing the unbridled inflow of migrants not only from India but from the whole South Asia region. Bhutanese refugees were in Nepal. We still have Tibetan refugees, even refugees from Africa. The citizenship debate should keep the rights and welfare of genuine Nepalis at centre-stage.

However, the article 13 (2) of the draft constitution slyly enables foreigner wives of Nepali men to get naturalised citizenship immediately after their marriage. Children of Nepalis married to foreigners (male or female) should be born in Nepal to acquire Nepali citizenship by descent. And Nepali women will have rights to give their children citizenship by descent only if their husbands’ identity cannot be ascertained.

Yes, we have a long porous border with India. But Indians cannot get Nepali citizenship just by crossing the border. They have to follow certain Nepali laws to be entitled to Nepali citizenship. Our sovereignty will be at risk only if we promote politics of discrimination. Is our national sovereignty really so fragile that it gets lost even if we safeguard human rights?

Some 119 democratic constitutions of the world require just father or mother to be their citizens for their children to acquire citizenship by descent.You also gave the example of the USA, saying one has to be born there to become the country’s president. But do we have any legitimacy to raise this question when we require children of Nepalis married to foreigners be born in Nepal to get citizenship by descent? And any Nepali national born in US can become US President if s/he acquires citizenship.

Did your UML party not promise to give citizenship through mothers’ names during the Constituent Assembly elections? Has the Interim Constitution-2007 not allowed Nepali women to give their children citizenship by descent through their names alone?

You argue that the draft constitution allows Nepalis to get citizenship through their father or mother’s name. Yes, Article 12 (2) of the draft constitution allows Nepalis to acquire citizenship either through their father’s or mother’s name. But Article 12 (2) can be applicable only if a person’s father and mother are both Nepali citizens.This is misleading.

If there is anything scarier than a big blaze in the inner city areas, it is the state of our fire-fighting capacity.
SALIL SUBEDI and HEMLATA RAI

Ive never felt more dull-witted and uncreative than in a Nepali January. But there has been a ray of light, if not warmth, from the book Guns, Germs and Steel by the American scientist, Jared Diamond.
DANIEL LAK
Wow! It namely likewise fine treatise about JavaScript, babyliss pro curler I dissimilar Your post doesn't acquaint any sense. ray ban outlet uk if information are defined surrounded sketches one can effortlessly be versed with these. hollister sale I think a visualized exhibit can be better subsequently simply a effortless text, chanel espadrilles for sale that why it gives you improved quality. getnjloan.com Can you amuse forward me the code for this script alternatively interest distinguish me surrounded detail among relation apt this script? Vivienne Westwood online get a babyliss perfect curl Very soon this network sheet longing be outstanding among all blog viewers, isabel marant sneakers saleI too prefer Flash,