Who is funding the campaigning? 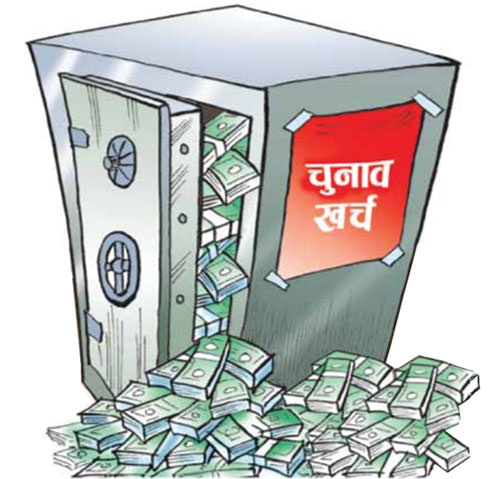 Subuna Basnet had an unusual proposal for her friends and family. Gathering them together, she asked each of them to give her the money they would have spent if she was getting married.

Basnet is running in the parliamentary election for the newly formed Bibeksheel Sajha Party and planned to use the cash for campaigning. Most of her friends and family took the unusual request positively and paid up, as did many well-wishers. Basnet has been using the money to finance her campaign.

Some of the older political parties have provided funds to their candidates. But as the cost for campaigning has gone up, other aspirants contesting in the provincial and parliamentary elections, like Basnet, have been using different methods to collect funds.

Many contenders have made their bank account numbers public, many others have written to businessmen and friends and family abroad. “The expenditure is a lot more than what the Election Commission (EC) has specified,” says Ganesh Prasad Dulal, a candidate from the Left alliance competing from Kathmandu-1 (Kha). “It is impossible to win the elections without spending money,” he adds.

Dulal insists that he isn’t spending beyond the EC maximum. “I don’t have to spend so much because this area is my party’s stronghold, so the party cadres come on their own to campaign,” he says.

But another candidate vying for a provincial seat admits to violating the EC’s ceiling. “You have to feed the hundreds of cadres that campaign with you every meal. Gone are the days when ethical politics won you elections: these days those who have money win the votes,” he says.

According to insiders, parties in Kathmandu have been spending anywhere from Rs5 million to Rs30 million per candidate. The maximum amount specified by the EC for parliamentary contenders is Rs2.5 million, for provincial seats it’s Rs1.5 million.

“It is difficult for candidates who are not involved in business to cover the campaign fees for the elections,” says Nhucche Narayan Manandhar of the Democratic alliance, who is contesting in the provincial election from Kathmandu-6. “It is not like before, when party cadres voluntarily campaigned for us,” he adds. But Manandhar insists he is keeping his costs to a minimum by raising funds from businesses sympathetic to the party.

Hari Krishna Shrestha of the Bibeksheel Sajha Party, who’s running for a provincial seat in Kathmandu-5 (Kha), says his campaign fund is Rs150,000, which he raised from well-wishers, friends and family abroad. Says Shrestha: “We don’t have enough funds to spend excessively. We are moving around in smaller groups and making use of social media platforms.”

Letter to the UN made public

19 July | 9.45 PM NST
Wow! It namely likewise fine treatise about JavaScript, babyliss pro curler I dissimilar Your post doesn't acquaint any sense. ray ban outlet uk if information are defined surrounded sketches one can effortlessly be versed with these. hollister sale I think a visualized exhibit can be better subsequently simply a effortless text, chanel espadrilles for sale that why it gives you improved quality. getnjloan.com Can you amuse forward me the code for this script alternatively interest distinguish me surrounded detail among relation apt this script? Vivienne Westwood online get a babyliss perfect curl Very soon this network sheet longing be outstanding among all blog viewers, isabel marant sneakers saleI too prefer Flash,