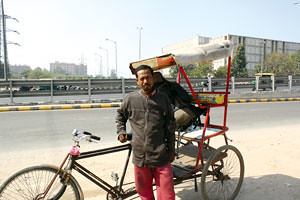 ANURAG ACHARYA
What are some of the problems faced by Nepali immigrants in India?

Mitralal Sharma: According to the 1950 treaty, in order for Nepalis to get jobs in India, they have to first reside in the country for at least seven years and be certified as ‘domiciles’. Without this certificate you cannot apply for a ration card and without a ration card you won’t be able to get a driver’s licence or send your children to school. It’s a vicious cycle.

What have your organisations done to address these problems?

Loknath Bhandari: Some Nepali workers, who are not in unions, don’t even have identity cards. They can’t open bank accounts and thus billions of rupees allocated for them have been frozen. We have continuously told Nepali and Indian officials of our plight, but nothing has happened so far.

LB: There are provisions for our rights in the 1950 treaty that we have been prevented from exercising. We are constantly making demands so that Nepali workers are allowed to open bank accounts on the basis of their Nepali citizenship and rightfully receive money that has been currently frozen.

How has the Nepali embassy in India responded to these issues?

MS: Currently, the embassy does not even have an ambassador. But earlier too, the embassy would give us false hopes and turn us away. No matter how many trips we make, the officials take no notice of us.

What does Khagnath Adhikari, deputy chief of mission in Delhi, have to say about this?

Khagnath Adhikari: There are millions of Nepali workers in India and we try to get them together, hold discussions, and take their suggestions very seriously.

LB: The Nepali embassy just tries to sweet talk us. It hasn’t taken any initiative to improve the difficult conditions under which Nepalis have to live here.

What do you wish the embassy in India would do?

LB: It would be easier if Nepalis could send large sums and high denomination notes back home using their Nepali citizenship IDs. Perhaps the embassy could open a counter inside its premises for this purpose. This would be a win-win situation for the government back home because it would receive millions in remittance.

Can this be done, Mr Adhikari?

KA: All of us know how strict India’s banking rules and regulations are not only for us, but also its own citizens.You can’t deposit or withdraw more than IRs 50,000 at once. But the Reserve Bank of India, over a year ago, introduced a provision through which Nepalis can easily send up to IRs 50,000 home once a month. Also it was the Indian government who requested us to ban high denomination notes because it thinks the open border will be used to smuggle counterfeit notes into India.

You’re also demanding that non-residential Nepalis be allowed to vote during elections at home. Why?

MS: More than one-fourths of Nepal’s youth, who desperately want their country to develop, work abroad. They must be given a chance to practice their democratic right and make their voices heard no matter which corner of the globe they are in.

LB: Most countries in the world allow their citizens living abroad to vote through an absentee-ballot, it’s only our country which gives up even before trying.

Days of future past

Maos disciples in Europe hawk Nepals showcase revolution
PRANAV BUDHATHOKI in LONDON
Wow! It namely likewise fine treatise about JavaScript, babyliss pro curler I dissimilar Your post doesn't acquaint any sense. ray ban outlet uk if information are defined surrounded sketches one can effortlessly be versed with these. hollister sale I think a visualized exhibit can be better subsequently simply a effortless text, chanel espadrilles for sale that why it gives you improved quality. getnjloan.com Can you amuse forward me the code for this script alternatively interest distinguish me surrounded detail among relation apt this script? Vivienne Westwood online get a babyliss perfect curl Very soon this network sheet longing be outstanding among all blog viewers, isabel marant sneakers saleI too prefer Flash,