Through the eyes of a blind king 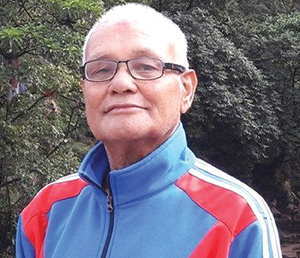 When the shortlist of nine books contending for this year’s Madan Puraskar was announced recently, many of the titles and authors were well known. But a book of poetry, Dhritarashtra, by Ghanshayam Kandel, which no one had heard about, was declared the winner of Nepal’s prestigious literary award last week.

A short epic in verse that deconstructs the myth of the Mahabharat, the slim volume belies its strong message of inclusiveness, respect for the differently-abled, and turns the story of the Mahabharat upside-down.

While everyone bet on big names and their much-hyped books, they are now curious about why Dhritarashtra was chosen by the Madan Puraskar Guthi.

Ghanshyam Kandel, 76, wrote five short epics before Dhritarashtra that earned him the fame that he rightly deserved. He also has four books of literary criticism and a collection of short poems, but the soft-spoken author who likes to keep a low profile remained largely unknown. Besides, his use of traditional rhyme and metre has been going out of fashion.

In Dhritarashtra, Kandel retells the story of the Mahabharat through the eyes of the blind king of Hastinapur, a mythical kingdom for which the Pandavs and the Kauravs fought the epic war. A personal tragedy inspired the author/poet to re-imagine the characters of the Mahabharat.

Six years ago, when he was head of the Nepali Department at Tribhuvan University, Kandel got an eye infection that never really healed. Despite many operations in Nepal and India, he lost the sight of that eye. It was then that he understood the pain and suffering of blind people, and conceived the idea of rewriting the Mahabharat through the eyes of the blind king.

The original Mahabharat depicts Krishna as a charismatic leader who fights for truth and justice. But in Kandel’s verse, Krishna appears as a crafty conspirator who tricks others into fighting the brutal war at Kurukshetra and plots the murder of Duryodhan and Dronacharya.

Dhritarashtra is told from the viewpoint of Dhritarashtra the blind king and focuses on how he perceives the protagonists of the Mahabharat war. The book forces us to reread the epic from the perspective of a disabled character marginalised by the original version of the myth.

Kandel says Dhritarashtra is more about the modern world rather than the Mahabharat per se. “I just use the legends of the Mahabharat to comment on modern issues,” he says.

Born to a Hindu Brahmin family in a remote village of Dhading, Kandel went to Banaras for higher studies. This ancient Indian city on the banks of the holy Ganges River was then the ultimate destination for Nepali scholars. Kandel admired the poetry of Lekhanath Poudel, Laxmi Prasad Devkota and Madhav Ghimire.

Kandel’s contemporaries switched to prose, but he remained faithful to metrical verses. Decades later, his passion for a fading genre of literature won him what is likely to be the biggest accolade of his life.