Shiva Gaunle in Kantipur, 3 May 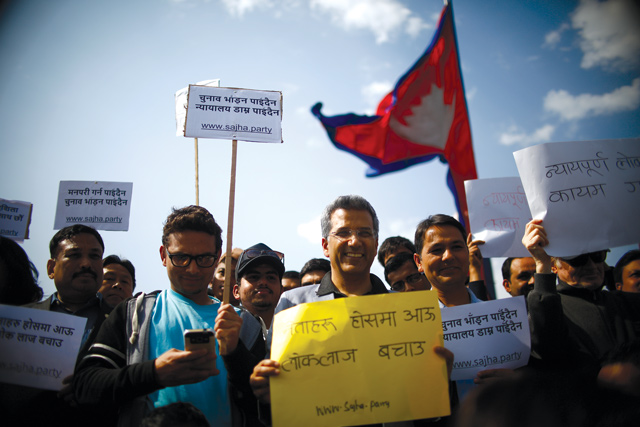 The way ruling coalition MPs have defended the impeachment motion against Chief Justice Sushila Karki proves that their move is nothing but an attempt to exert control over the judiciary.

Ruling party leaders sought to meet Karki ahead of the Supreme Court’s final verdict on the appointment of the new police chief, but Karki refused to meet their emissaries since Supreme Court guidelines do not allow the Chief Justice to meet parties to a sub judice case.

They decided to teach her a lesson.

NC President Sher Bahadur Deuba was angry with Karki because of her ruling against the appointment of the new police chief. But there were other reasons. Karki was also to hear a high-profile case this week about the encroachment of Phewa Lake in Pokhara. She was delivering final verdicts on other cases, including one involving ex-Minister Govinda Raj Joshi. Now she is out of office, and those charged with corruption are heaving a sigh of relief.

Karki’s tenure was ending on 7 June and she had publicly vowed to settle all high-profile corruption cases before then. She probably didn’t realise that she had powerful enemies who would stop at nothing.

The impeachment motion against Karki will most probably fail, but the country will have to pay the price. All constitutional bodies will proceed cautiously from here on, and the Constitution could even fail eventually. Ours is a democratic system in which the executive has limited authority, and cannot perform specific tasks of constitutional bodies. For example, elections are held by the Election Commission and corruption cases are investigated by the Commission for the Investigation of Abuse of Authority. These are some of the checks and balances in the Constitution.

Now, any party that has 150 MPs (one-fourth of the numeric strength in Parliament) can bully the Election Commission. The Public Service Commission may have to think twice before selecting civil servants. The National Human Rights Commission may not have the guts to speak out against the violation of human rights by major parties. Good governance and accountability are in deep peril.

The Constitution is clear about the basis of impeachment. Only those who have seriously violated the Constitution and other laws can be impeached. It is clear that the ruling parties knew that they would not be able to justify and pass the impeachment against the Chief Justice. Even so, they filed it because they wanted to keep her out of their way for a few weeks to avoid verdicts on corruption cases.

Kantipur, 26 January
Wow! It namely likewise fine treatise about JavaScript, babyliss pro curler I dissimilar Your post doesn't acquaint any sense. ray ban outlet uk if information are defined surrounded sketches one can effortlessly be versed with these. hollister sale I think a visualized exhibit can be better subsequently simply a effortless text, chanel espadrilles for sale that why it gives you improved quality. getnjloan.com Can you amuse forward me the code for this script alternatively interest distinguish me surrounded detail among relation apt this script? Vivienne Westwood online get a babyliss perfect curl Very soon this network sheet longing be outstanding among all blog viewers, isabel marant sneakers saleI too prefer Flash,