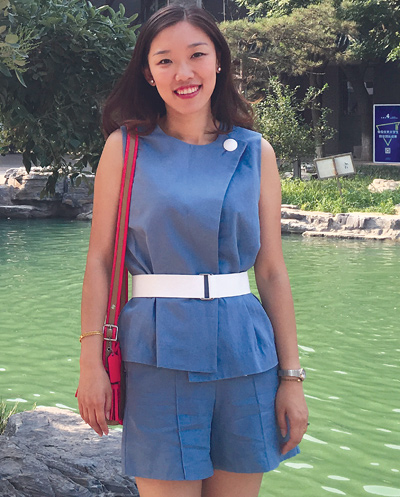 As China’s influence and investment grow internationally, there is increasing interest in learning English among the Chinese. However, while the rest of the China is learning English, Sing Yung has found herself drawn to the Nepali language.

Sin arrived in Santong Province 15 years ago to start college at the Communication University of China (CUC) in Beijing and decided to take up an additional foreign language as well. Her parents had learnt about a small Himalayan country that bordered China and Nepali seemed like an exotic thing to do.

“I found Devnagari script quite different from English letters and Chinese characters that I was used to, and I was drawn to learn the language,” says Sin, who is now a PhD student of Nepali language at Tribhuvan University under the supervision of Prof Madhav Pokhrel, who has given her the Nepali name ‘Indira’.

Sin isn’t only passionate about learning the Nepali language, but is equally interested to understand Nepali history, culture, society, journalism and religion. One of the papers for her Master in Journalism degree from CUC in 2012 was titled ‘Analysis of Chinese News in the Nepali Media’. In 2013 she studied Nepali at the Campus of International Languages in Kathmandu under a Chinese government scholarship.

Sin has visited Nepal 16 times, and plays a role in the collaboration of CUC with Tribhuvan University and the Campus of International Languages. Seeing the rise in number of Chinese visiting Nepal for trade, tourism, volunteering and education, she is happy her efforts will help build understanding.

She then headed of the Nepali Language Department at CUC in Beijing from where 44 Chinese students have graduated under her tutelage. Her students are either working in Chinese Radio International or at the Chinese Embassy in Kathmandu. The others have themselves gone on to teach Nepali at various Chinese universities.

Yung is also actively involved in translating Nepali books, and is in the final stages of completing the Mandarin edition of Diamon Sumshere Rana’s historical novel, Seto Bagh. Her teacher has also translated Muna Madan, the Nepali classic by Laxmi Prasad Devkota of a Nepali trader who dies in Tibet, leaving behind a young wife in Kathmandu.

Says Sin: “Muna Madan carries historic significance for Nepal-China relations, and we need more government support for the translation and research of such Nepali books into Mandarin.”

Janastha, 14 July
Wow! It namely likewise fine treatise about JavaScript, babyliss pro curler I dissimilar Your post doesn't acquaint any sense. ray ban outlet uk if information are defined surrounded sketches one can effortlessly be versed with these. hollister sale I think a visualized exhibit can be better subsequently simply a effortless text, chanel espadrilles for sale that why it gives you improved quality. getnjloan.com Can you amuse forward me the code for this script alternatively interest distinguish me surrounded detail among relation apt this script? Vivienne Westwood online get a babyliss perfect curl Very soon this network sheet longing be outstanding among all blog viewers, isabel marant sneakers saleI too prefer Flash,