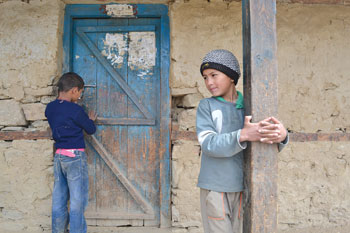 SUNIR PANDEY
It is seven in the morning and I am returning from the shed. The shed is a cow-pen converted into a hostel for students who are giving their SLC exams next April.

There is no one around the snaking foot trail, only nettle bushes on both sides. Two days ago Miraj was asking if we could generate electricity from the acid present in nettles. In reply I gave him a galvanometer so he could find it out for himself. No results yet.

At 9:15 the first bell sounds for a Grade 10 coaching class, which we’ve labelled Faraday. The students begin the day singing, Yo mann ta mero Nepali ho. I write the dates in English and Nepali and then a saying by Gandhi: “In a gentle way, you can shake the world.” We spend some time discussing Gandhi.

We are learning about sound and echoes today. I take them out to the terraces and instruct them to empty their lungs shouting. Expectedly, the echo returns. Everyone is puzzled. Ashok, leaning on the utis tree, wonders why we don’t hear echoes in flat places.

At the end of class, Surbir, who has been declared ‘journalist of the year’, pipes up: “Sir, please let us sing Namsa Namsa.” This is a Tamang language translation of the popular song Gaun gaun bata utha. Soon they begin singing it in Nepali, Tamang and even Maithili.

At the second bell, I go to Grade 8 aka Oxygen. The students start by singing Gopal Prasad Rimal’s Rato ra chandra surya. Scientist of the year Bisham brings out his homework: “Look, sir. I’ve made a bulb light itself using this circuit.”

I see he has made this circuit out of an old switch and a torchlight bulb. Hoisal is excited that if you put more batteries serially, this makes the light brighter. We do other such experiments and end by discussing Abdul Kalam.

On to Grade 9, also known as Fluorine, at the third bell. The students want to sing Buddhi Krishna Lamichhane’s Pindhi ma basera merai aama rudi hun. Today we are discussing Darwin. I let them interpret it in their own way. Some write stories, some write songs, some even poems about evolution. Bhim Maya has written a dohori song about the extinction of dinosaurs to the tune of Lalupate jharyo bhui tira, which all of us sing to end the class.

The fourth bell signals my free hour which I spend walking around the school. Grade 5 students are playing marbles in the field. Their class teacher is out in the sun, idling with her child. I have never seen her teach. But the principal never bats an eyelid, maybe he is intimidated.

It’s the same with the resource person and the school regulator. In fact, both jobs are handled by one person, an utterly resource-less man whom I’ve seen only twice at school. Once he wanted to collect some statistics for the new term, another time he wanted to log the coordinates of this place into a GPS.

I take Grade 5 away from their marbles, even though they are not my responsibility. Madan wants to hear the story about the country beyond the clouds. Yasodhara wants to hear the science story I related to Grade 7. Basna Maya has another request – the story of Bhagat Bahadur.

The country beyond the clouds is a story by Narayan Dhakal. I don’t know it by heart but I make things up along the way. The country is a utopia, a kind of Ram Rajya with social welfare, because I want the students to get inspired and do what is moral. The students want to know when the serialised story will be over. Two years, I say. They say, please finish this story before you go.

The science story is based on a children’s book by Stephen Hawking and his daughter Lucy’s work. Again, I take artistic licence. When I tell them about weightlessness in space they are all ears. When I show them a video about zero gravity, their amazement knows no bounds. The story of Bhagat Bahadur, a story I wrote about  the struggles of a child somehow matches with an Indian film called I am Kalam.

The fifth bell takes me back to Grade 10. We start with Subhas Chandra Bose, although we are revising our lesson about the universe. The sixth bell is for Grade 6, called ‘Newton’. The students want to sing Hami dherai sana chhaun, hamro mutu sano chha before we discuss photosynthesis. I take them out to a tree and ask them how plants eat. They have their own opinions, but most of them say plants make their own food. But where is the stove? Everyone laughs. I tell them about stomata, xylem, phloem and chlorophyll.

At the end of class everyone shows me their diary. Amrit’s letters are too bold, I tell him to be lighter with his pen. To Norsang I say drawing a diko over the letters is like roofing a house – the rain will get in if you don’t have a roof.

This is the end of my day. Or it should be. But again I see Grade 10 idling about, the economics teacher is absent. So I take them in and do something productive. The final bell rings.

In the staff room, they are talking about a student who has eloped. I return to my own room. Why did Suntali elope? Later I find out this was arranged by a sister-in-law. It’s a custom around here: first you elope, later you get married. Although there has been a revolution in our politics, our culture is still the same.

I return to our shed in the evening. Jyameng has brought me some rayo saag and a long stalk of sugarcane. Pradip gives me some bojho. I make them practice Maths, Science, English, and Social Studies.

At midnight, I read a page and go to sleep on a straw bed, inside the shed. Outside, and on the roof, there is the rush of rain.

Reinstate the house as a first step to peace
SAMBHU THAPA
Wow! It namely likewise fine treatise about JavaScript, babyliss pro curler I dissimilar Your post doesn't acquaint any sense. ray ban outlet uk if information are defined surrounded sketches one can effortlessly be versed with these. hollister sale I think a visualized exhibit can be better subsequently simply a effortless text, chanel espadrilles for sale that why it gives you improved quality. getnjloan.com Can you amuse forward me the code for this script alternatively interest distinguish me surrounded detail among relation apt this script? Vivienne Westwood online get a babyliss perfect curl Very soon this network sheet longing be outstanding among all blog viewers, isabel marant sneakers saleI too prefer Flash,