Tatopani Bazar, a major financial hub near the border crossing between Nepal and China, still remains closed ten months after the April 2015 earthquake. 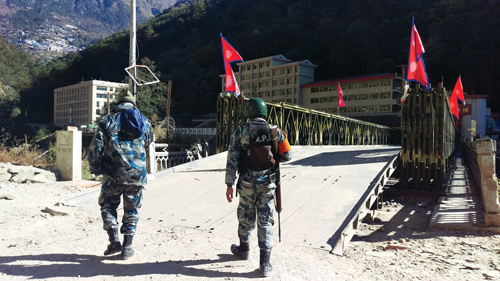 Tatopani Bazar, a major financial hub near the border crossing between Nepal and China, still remains closed ten months after the April 2015 earthquake. China has already removed its customs office from Khasa because of geological instability stemming from the earthquake.

“We have requested our Chinese counterparts several times to open the customs at Tatopani,” says Director General of Department of Customs Sishir Kumar Dhungana. “When the custom officer of Lhasa came to Kathmandu, we had agreed on initiating the opening of Tatopani. But there has been no progress.”

Dhungana says that unless a seismological study of Khasa is conducted, there is no chance that China will reopen the area for business. Chinese officials have indicated that if their anticipated study finds that the region is vulnerable to earthquakes, the area might be shut down permanently.

However till date, the Nepali government has not been notified of any study being carried out by China in the region. In response to the delay, Nepal has also shut down its customs office following China’s withdrawal.

The Ministry of Foreign Affairs has appointed a committee to discuss this critical issue with China at a diplomatic level. “When the Minister of Foreign Affairs visited China, there had been an agreement to open Tatopani,” says spokesperson Tara Prasad Pokharel.

According to customs officers, had Tatopani been operating regularly, it would have collected Rs 5 billion in revenue in the past 10 months. Dhungana states that Rasuwagadhi, another border point with China, has benefitted from Tatopani’s closure, Nonetheless, couriers are reluctant to use this route as an alternative for imports due to poor road conditions.

Since the blockade was lifted, most imports from China have now been rerouted through Kolkata in India.

Nyaya Health is making the right to health a reality for the people of Achham
PAAVAN MATHEMA
Wow! It namely likewise fine treatise about JavaScript, babyliss pro curler I dissimilar Your post doesn't acquaint any sense. ray ban outlet uk if information are defined surrounded sketches one can effortlessly be versed with these. hollister sale I think a visualized exhibit can be better subsequently simply a effortless text, chanel espadrilles for sale that why it gives you improved quality. getnjloan.com Can you amuse forward me the code for this script alternatively interest distinguish me surrounded detail among relation apt this script? Vivienne Westwood online get a babyliss perfect curl Very soon this network sheet longing be outstanding among all blog viewers, isabel marant sneakers saleI too prefer Flash,