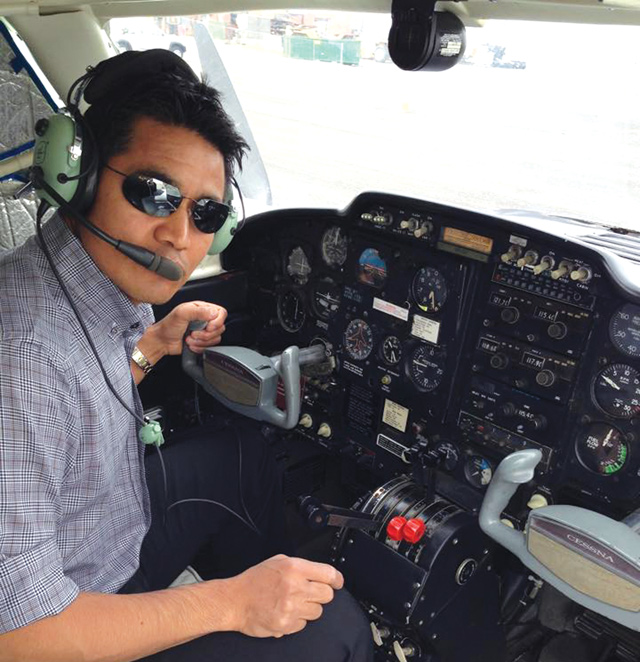 Pemba Chiri Sherpa felt the shocks of the 25 April earthquake that rattled Nepal on the other side of the world in the United States. Since the earthquake, Sherpa, an entrepreneur from Denver has been busy collecting funds for survivors back in his home district of Solukhumbu. The 42-year old is not just another Nepali living in the US, he is a businessman who has done well for himself while maintaining contact with his homeland.

Born in the village of Syangma, Sherpa spent his childhood herding yaks. At age 16, he started working as a professional mountain guide and two years later he moved to the US, where he completed his secondary education in 1991.

In Colorado, he saw the same beauty in the Rockies as the Himalaya back home and decided to make it his home. His experience in the tourism industry helped him establish the Sherpa Ascent International travel company and for many years he led trekkers across the Himalaya and brought over 100 tourists to Nepal every year. The ten-year conflict in Nepal, however, took a toll on the tourism industry.

To compensate for lost business, he opened Sherpa Adventurer’s Restaurant and Bar in Boulder, Colorado serving up Nepali, Indian and Tibetan food. He then tried his hand in the real estate business and immediately struck gold. He also established Sherpa Chai, a company that sells tea harvested in Nepal and he hopes to plough theprofit from this business for social work back home.

Sherpa also has a passion for flying and has flown his private Piper plane to Guatemala, Tanzania and Mexico. One day, he wants to fly in Nepal too, and once even considered getting into the airline business in Nepal. But the unstable political situation dissuaded him.

Married to architect Moriko Tumhara, Sherpa is now planning a motivational autobiography to inspire others like him to work hard to attain one’s goal in life. “You cannot reap the fruit in the present without sowing the seeds in the past,” says Sherpa.

After the earthquake Sherpa flew to Nepal and visited nine villages in Solukhumbu. When the relief materials he brought were stuck at customs, he rushed cash to survivors with cash. Even before the earthquake, Sherpa made regular donations to build schools. Sherpa still sees possibilities in tourism as the country recovers. He says: “The rivers, hills and mountains are still intact. And so is the Nepali heart.”

The world is getting pretty cosy. Some of the time thats good, at others it isnt.
DANIEL LAK

Landmines have emerged as a major threat to civilians.
NAVIN SINGH KHADKA
Wow! It namely likewise fine treatise about JavaScript, babyliss pro curler I dissimilar Your post doesn't acquaint any sense. ray ban outlet uk if information are defined surrounded sketches one can effortlessly be versed with these. hollister sale I think a visualized exhibit can be better subsequently simply a effortless text, chanel espadrilles for sale that why it gives you improved quality. getnjloan.com Can you amuse forward me the code for this script alternatively interest distinguish me surrounded detail among relation apt this script? Vivienne Westwood online get a babyliss perfect curl Very soon this network sheet longing be outstanding among all blog viewers, isabel marant sneakers saleI too prefer Flash,