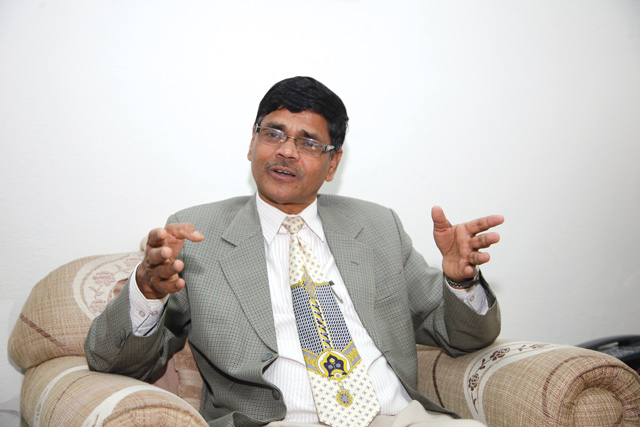 BBC Nepali: Is it possible to hold both parliamentary and provincial polls before the deadline?

Ayodhi Prasad Yadav: We were expecting laws related to parliamentary and provincial elections by mid-July, and the constituency delineation commission’s report by July end. That did not happen, so the possibility of both elections before 21 January 2018 looks very slim. We are now just pushing for timely parliamentary polls, not for both. And even for that, the government needs to fix a date by no later than mid-August.

What about provincial polls after 21 January?

The Election Commission is in favour of holding parliamentary elections first, then provincial polls. The government has not officially reacted to our proposal.

How can the Electoral College be formed without provincial polls, and how can Parliament get full shape without it?

Parliament will not get full shape immediately. It will take time.

The Prime Minister has asked you to hold parliamentary and provincial polls simultaneously.

It would be very difficult to do that, not just technically but also in terms of management and voter education. Both polls have mixed systems, which means we will have to print four types of ballot papers, 700 million of them. It is a frightening prospect.

Does the EC want to introduce electronic voting systems for these polls?

The government, political parties and the EC need to sit down together to discuss this issue.

You have also proposed the use of the same ballot papers for both First Past the Post (FPTP) and Proportional Representation (PR) systems. How does that help? That was just one idea.

The army, police and government employees were allowed in the past to cast votes under the PR, but not under the FPTP. This time?

We can introduce pre-voting for them. But if they vote prior to other voters, their ballots will just be counted as PR votes. We can arrange that even for voters who are flying abroad on election day.

How to eradicate poverty through profit
ARTHA BEED

Still in the pipeline

Melamchi set to roll again with new Chinese contractor
NAVIN SINGH KHADKA
Wow! It namely likewise fine treatise about JavaScript, babyliss pro curler I dissimilar Your post doesn't acquaint any sense. ray ban outlet uk if information are defined surrounded sketches one can effortlessly be versed with these. hollister sale I think a visualized exhibit can be better subsequently simply a effortless text, chanel espadrilles for sale that why it gives you improved quality. getnjloan.com Can you amuse forward me the code for this script alternatively interest distinguish me surrounded detail among relation apt this script? Vivienne Westwood online get a babyliss perfect curl Very soon this network sheet longing be outstanding among all blog viewers, isabel marant sneakers saleI too prefer Flash,