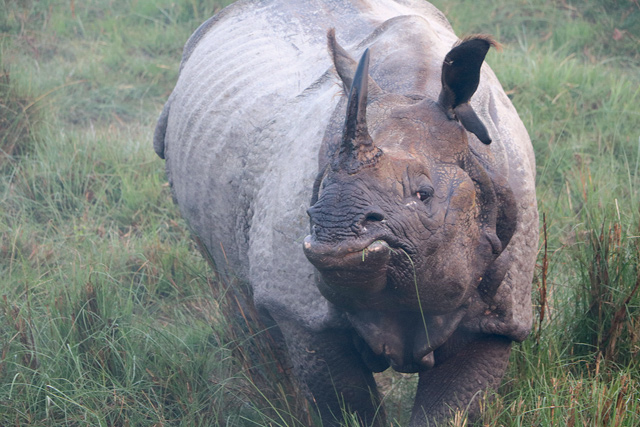 Recently, the Chitwan National Park invited Forest Minister Shankar Bhandari for a function to mark 1,000 days with zero-poaching of the endangered one-horned rhino. A billboard was erected to commemorate the achievement.

However, on that very day a rhino had been found dead in Gaidakot of Nawalparasi. It’s horn was intact, which meant it wasn’t poached, but officials believe it had been killed by electrified fences put up by farmers to protect their crops.

Rhinos may not be poached any more, but many have been electrocuted, or have been poisoned by farmers. Out of the 25 wildlife fatalities last year, 15 were rhinos, 14 of which died in the last 6 months alone. Three of them were killed either due to poisoning or electrocution, and two more were killed this year due to the same reason. Others died of natural causes like being gored by other rhinos, while giving birth, or in tiger attacks.

Rhinos entering farms in the buffer zone have prompted farmers to set up traps, electric fences and even poison baits. While the national park is now safe from poachers, the lack of water and grasslands are driving rhinos outside the park where they come in conflict with humans.

The Chitwan National Park spends Rs 120 million for public awareness about wildlife conservation. Traffickers are fined up to Rs 50,000 or jailed for up to 15 years, however poachers are rarely caught.

Nepal is still inadequately prepared for the next big quake which, like it or not, will happen.
ANJANA SHRESTHA

For anyone interested in Nepali history, there is now a place to explore a vital part of it in the flesh.

"We need to agree on a minimum code of conduct."

Before and after in Kathmandu Valley

While high profile monuments get all the attention, Kathmandu Valleys old-world architecture is equally in peril. A conservation trust is racing against time to save these forgotten treasures.