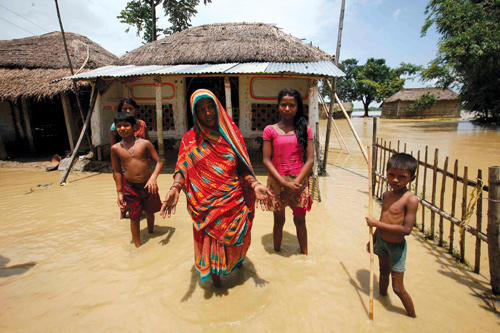 Various organisations and individuals have voluntarily come forward to raise money and collect relief for the people affected by this week’s floods, which is very commendable. They may have been motivated by altruism, but it is difficult to rule out the possibility of the misuse of relief money and materials. Yet, it cannot be an excuse for the government to restrict volunteers from distributing relief in flood-affected areas.

It will take a long time to restore the lives and livelihoods damaged by the floods, but the immediate need is relief. Despite joint efforts by the government, NGOs and individuals, relief has not reached all flood victims. In many places, people displaced by the floods are hungry. They need immediate support, and the government alone is not able to provide that.

Fearing that the relief will be misused or not distributed equally, the government has introduced a one-window policy, requiring all NGOs and individuals to distribute relief only through government channels. This may delay relief distribution, adding to the sufferings of flood survivors. The government mechanism for relief and reconstruction is notorious for painfully slow responses and unnecessary procedural hassles. So, instead of channeling all the relief through one door, the government must facilitate NGOs and individuals to swiftly reach out to flood-affected communities. The government must work with others instead of alienating them.

Official data shows that the floods have damaged at least 3,000 houses in the Tarai. Tall and sturdy houses were not damaged by the floods, but food grains stored in them are no longer edible. The floods have also damaged water systems, forcing people to drink contaminated water. This could lead to a disease outbreak, and flood survivors have already begun to suffer from typhoid, diarrhea and skin diseases. The Health Ministry should be prepared to tackle this crisis.

There were reports that money raised for the survivors of the April 2015 earthquake was misused. The government must not allow this to happen again. But its one-door policy for relief is not the solution.

How can the planning commission goad the government towards accountability?
AJAYA DIXIT

In a dramatic court revelation, a Dutch climbers claim that he reached the top of Everest has been disproved nearly 20 years after the event.
MARIAN AARTS in AMSTERDAM

Tricks of the trade

Nepal may have the rug pulled from under it in the WTO.
NAVIN SINGH KHADKA

Wriggling out of the clutches of cartels
ASHUTOSH TIWARI
Wow! It namely likewise fine treatise about JavaScript, babyliss pro curler I dissimilar Your post doesn't acquaint any sense. ray ban outlet uk if information are defined surrounded sketches one can effortlessly be versed with these. hollister sale I think a visualized exhibit can be better subsequently simply a effortless text, chanel espadrilles for sale that why it gives you improved quality. getnjloan.com Can you amuse forward me the code for this script alternatively interest distinguish me surrounded detail among relation apt this script? Vivienne Westwood online get a babyliss perfect curl Very soon this network sheet longing be outstanding among all blog viewers, isabel marant sneakers saleI too prefer Flash,