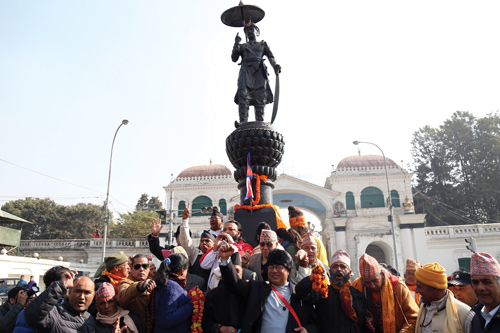 Vijay Kumar Pandey: What is your take on the debate over whether Prithvi Narayan Shah’s birth anniversary should be celebrated as National Unity Day?

Bimalendra Nidhi: Prithvi Narayan Shah should not be dragged into controversy. The Nepal we live in today was his construct. That is a fact and we should never ignore it. I leave it up to scholars to conclude whether he expanded his Gorkha kingdom or annexed other principalities into it. But he unified Nepal at least geographically. Whether his birth anniversary should be marked as National Unity Day is a political issue. One school of thought argues that multiple nations may exist within one country, on the other hand whether Nepal’s unification was an act of nation building at all can be a matter of debate. Even today, ideologues are divided over whether Shah should be remembered as a symbol of national unity. But modern Nepal exists because of him, and we should not belittle his contributions. We should all respect him.

Do you yourself respect or loathe him?

If royalists want to revive the monarchy by celebrating Shah’s birth anniversary, it will be short-sightedness. But if republicans like me belittle his contribution only because he was a king, it is also our narrow mindedness. These are both extremist views. Shah could have unified Nepal to rule it as an authoritarian leader, but what matters more now is the country that he left behind for us. His act of unification should not be judged by modern yardsticks. Republicans should not fear being labeled royalists for respecting a king who contributed to our nation-building process.

Can we start talking now?
RAMESH POUDEL in SANDHIKHARKA
Wow! It namely likewise fine treatise about JavaScript, babyliss pro curler I dissimilar Your post doesn't acquaint any sense. ray ban outlet uk if information are defined surrounded sketches one can effortlessly be versed with these. hollister sale I think a visualized exhibit can be better subsequently simply a effortless text, chanel espadrilles for sale that why it gives you improved quality. getnjloan.com Can you amuse forward me the code for this script alternatively interest distinguish me surrounded detail among relation apt this script? Vivienne Westwood online get a babyliss perfect curl Very soon this network sheet longing be outstanding among all blog viewers, isabel marant sneakers saleI too prefer Flash,