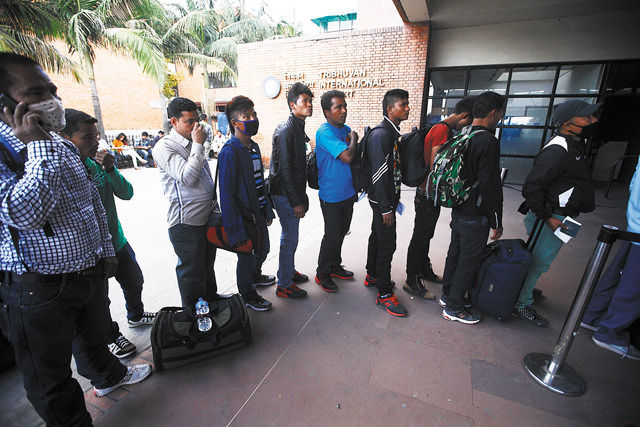 During all these years of political instability, Nepal’s leaders were able to keep wrangling for control without having to address economic problems.

As the Left Alliance prepares to form the new government, there are signs that the engine of the economy is failing. The Nepal Rastra Bank (NRB) has just released scary statistics, warning that the remittance-driven economy is collapsing and Nepalis might be pushed further into poverty.

In the first four months of this fiscal year, the volume of remittance received by Nepal decreased 1.4% compared with the corresponding period last year. Because remittance makes up nearly one-third of the GDP, even a small decline could have severe impacts on the economy.

There were signs of distress as early as 2015, when the number of outbound migrant workers began to fall, and remittance growth slowed. But this year, the volume of remittance itself has declined.

“Remittance growth has already reached a saturation point, and it can no longer sustain our economy,” says Nar Bahadur Thapa, Chief of the NRB’s research department.

Gulf countries, mired in a serious political crisis that threatens to escalate into a war, are not hiring as many migrant workers as they were until a couple of years ago.

Although the number of Nepalis who went overseas for employment in the first four months of this fiscal year fell by just 1% over the same period last year, the numbers of Nepali workers migrating to Qatar and Saudi Arabia have declined drastically: 23.58% and 49.98% respectively.

After Qatar won the bid to host the FIFA World Cup in 2022, it needed a huge labour force to build stadiums, roads, hotels and other infrastructure. As a result, Qatar emerged as the topmost labour destination for Nepali workers.

However, after a Saudi Arabia-led coalition of West Asian countries began to blockade Qatar last year, the emirate is in trouble. Ram Prasad Bhantana of Nepal Association of Foreign Employment Agencies (NAFEA) says: “We hear that many Nepalis working in Qatar have not received salaries for months.”

Saudi Arabia itself is facing an economic slowdown mainly because of a fall in global gas and oil prices. So are other Arab countries where Nepalis work. Malaysia, the only country outside of the Gulf that hires thousands of Nepali migrant workers every year, is now relying more on Bangladeshi workers.

The NRB has already begun to witness impacts of the remittance slump on the country’s cash reserve and balance of payment. Soon, Nepalis’ purchasing power will decline, and the government will have to deal with a dramatic rise in unemployment.

Samaya, 10 July
Wow! It namely likewise fine treatise about JavaScript, babyliss pro curler I dissimilar Your post doesn't acquaint any sense. ray ban outlet uk if information are defined surrounded sketches one can effortlessly be versed with these. hollister sale I think a visualized exhibit can be better subsequently simply a effortless text, chanel espadrilles for sale that why it gives you improved quality. getnjloan.com Can you amuse forward me the code for this script alternatively interest distinguish me surrounded detail among relation apt this script? Vivienne Westwood online get a babyliss perfect curl Very soon this network sheet longing be outstanding among all blog viewers, isabel marant sneakers saleI too prefer Flash,