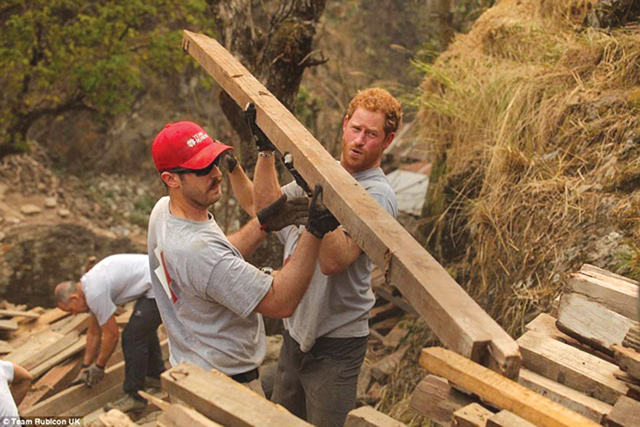 In April last year, pictures of Britain’s Prince Harry labouring to rebuild an earthquake-damaged school in Dharche in Gorkha created waves in the Nepali media. A year later, reconstruction work at the same school, Prabhatikaran Secondary School, is complete.

Children, teachers and parents of the school cannot contain their happiness. Students, who had been studying in makeshift tin shelters, are excited to be moving into a sturdier building.

Principal Jiba Tamu explained that the earthquake-resistant school with 12 rooms was built after an investment of Rs 35 lakhs. It is now gearing up to conduct classes from its new building once the next session starts.

Prince Harry had spent six days in Lapubesi, a village at the epicentre of the April 2015 earthquake, during his official visit to Nepal last year. On hearing that Prabhatikaran Secondary School needed rebuilding help, Harry volunteered with Team Rubicon UK. It was then that pictures of the prince carrying wooden beams and sacks of cement surfaced in the Nepali media.

News that the school’s new building has been completed has already been conveyed to Prince Harry, says Team Rubicon. However, the school is not without problems. Although the building is done, it still lacks furniture and teaching materials. Since students have to travel long distances to reach the school it also needs a hostel, said the principal but, “there is no budget,” explained Tamu.

Going green is no longer a fad, but a necessity. Meet the exhibitors at Nepali Times eco fair to learn innovative ways to be environment friendly.

Don't push the Madhes to another violent movement
NAVIN JHA

Why should anyone put money into a country where no one listens to the prime minister, not even his own cadre?
ASHUTOSH TIWARI
Wow! It namely likewise fine treatise about JavaScript, babyliss pro curler I dissimilar Your post doesn't acquaint any sense. ray ban outlet uk if information are defined surrounded sketches one can effortlessly be versed with these. hollister sale I think a visualized exhibit can be better subsequently simply a effortless text, chanel espadrilles for sale that why it gives you improved quality. getnjloan.com Can you amuse forward me the code for this script alternatively interest distinguish me surrounded detail among relation apt this script? Vivienne Westwood online get a babyliss perfect curl Very soon this network sheet longing be outstanding among all blog viewers, isabel marant sneakers saleI too prefer Flash,