Prachanda then and now 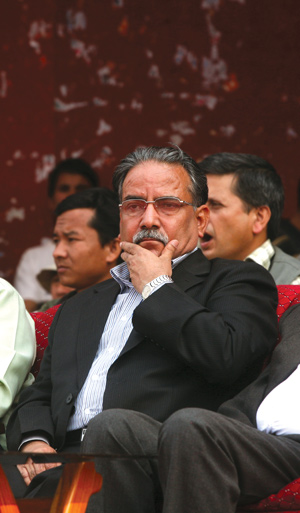 Prime Minister Pushpa Kamal Dahal had planned to get his China visit endorsed by a cabinet meeting before leaving Kathmandu on 23 March.

This is just another example of how Dahal has lost his ability to make bold decisions.

When he became Prime Minister for the first time in 2008, Dahal did not shy from making bold and even controversial decisions. He was then a symbol of fierceness and revolutionary zeal. Dahal is now a different person. It seems that he has lost his ability to lead and persuade, and is fast becoming a man of inaction.

During his first prime ministerial tenure, Dahal sacked Army Chief Rookmangud Katwal despite opposition from other parties, ended the practice of appointing an Indian as the head priest of Pashupatinath, proposed a revision of the 1950 treaty with India and agreed to integrate ex-Maoist combatants into the national army despite opposition from hardliners within his party.

This time, Dahal looks a shadow of himself. He has not yet decided whether Nidhi is senior to Thapa. He failed to exercise his power to choose a police chief of his choice, and agreed on the name proposed by NC President Sher Bahadur Deuba. The only significant decision that Dahal has made so far is to announce local elections on 14 May, but this he did only after being pressed by Deuba.

Then, Dahal was defiant to India. This time, he has not uttered a word against the neighbour, even when a Nepali was killed by the Indian border force in Kanchanpur district.

A leader from Dahal’s own party says: “Our Prime Minister has turned into a rubber stamp. He does what he is told by his coalition partners.

CPN (Maoist-Centre) spokesperson Pampha Bhusal puts it differently: “As the leader of the ruling coalition, the Prime Minister has to walk hand-in-hand with other partners. He cannot make every decision on his own.

Bhusal adds that Dahal would have remained the same firebrand leader if the Maoists had triumphed in the last election.

Ambiguous and weak rules of engagement could be fatal because excessive army casualties during initial engagements with Maoists could give insurgents an aura of invincibility
Wow! It namely likewise fine treatise about JavaScript, babyliss pro curler I dissimilar Your post doesn't acquaint any sense. ray ban outlet uk if information are defined surrounded sketches one can effortlessly be versed with these. hollister sale I think a visualized exhibit can be better subsequently simply a effortless text, chanel espadrilles for sale that why it gives you improved quality. getnjloan.com Can you amuse forward me the code for this script alternatively interest distinguish me surrounded detail among relation apt this script? Vivienne Westwood online get a babyliss perfect curl Very soon this network sheet longing be outstanding among all blog viewers, isabel marant sneakers saleI too prefer Flash,