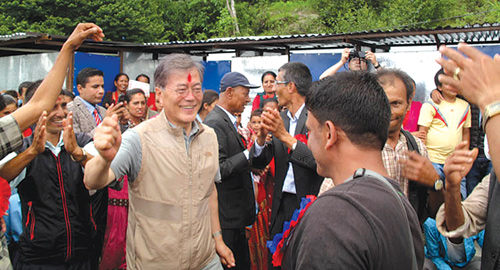 Moon helped in the reconstruction of Arukharka Secondary School in Belkot, joining others to carry bricks and material for repair work. He also provided science equipment to the school.

“He is a very simple and humble man, and mixed well with the local people,” recalls Bhakta Ram Lamichhane, who is affiliated to labour unions assisting Nepali workers in Korea and helped organise the trip for Moon. He himself spent three years working in Korea.

The trek to Langtang was along trails that had not yet been repaired after landslides triggered by the earthquake, and Moon joined other Korean and Nepali colleagues to remove rocks and clear the trail. “I was surprised that a person who was to become the president of his country was so friendly and generous,” Lamichhane said.

Moon represented the Democratic Party and got 41.08 per cent of the votes when results were announced on Tuesday, defeating his nearest rival Hong Jeon Pyo, who got 24.3 per cent. Moon also contested elections in 2012, but was defeated. He has been sensitive to the needs of migrant workers in Korea.

Moon said he came to Nepal and Bhutan to “seek happiness and peace,” and spent two weeks in Nuwakot and Rasuwa trekking to the village in Langtang buried by an avalanche in 2015 and to Gosainkunda Lake. But he also spent time with Nepali returnees from Korea to inquire about their well-being.

The traditional goodwill between the peoples of Nepal and India is being systematically dismantled by unfounded and mischievous propaganda. Nepal is no match to counter it.
GANESH RAJ SHARMA

Koirala expected to step down today

Kathmandu, May 3:
Wow! It namely likewise fine treatise about JavaScript, babyliss pro curler I dissimilar Your post doesn't acquaint any sense. ray ban outlet uk if information are defined surrounded sketches one can effortlessly be versed with these. hollister sale I think a visualized exhibit can be better subsequently simply a effortless text, chanel espadrilles for sale that why it gives you improved quality. getnjloan.com Can you amuse forward me the code for this script alternatively interest distinguish me surrounded detail among relation apt this script? Vivienne Westwood online get a babyliss perfect curl Very soon this network sheet longing be outstanding among all blog viewers, isabel marant sneakers saleI too prefer Flash,