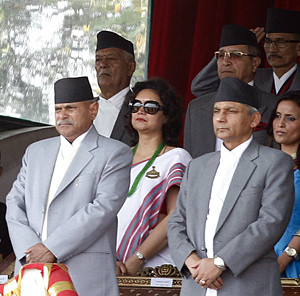 MIN RATNA BAJRACHARYA
Exactly a month ago, Khil Raj Regmi became Chairman of the Interim Council of Ministers without resigning from his chief justice’s post, solely through the efforts of major political parties. To come to power Regmi courted leaders, betraying a lawyer’s code of conduct. He even filled his cabinet with retired bureaucrats nominated by the parties just to keep them happy. President Ram Baran Yadav too played along and approved an ‘obstacle-clearing’ order that propelled Regmi to top post, without thinking about the long-term impacts on the country’s politics and constitution.

In the beginning, the CJ-led government completely kowtowed to the four-party mechanism that, in one leader’s words, still held the keys. But now that Regmi and his ministers feel power is firmly within their hands, they are gradually moving out of the mechanism’s shadow. Regmi has provided clear indications that he won’t let himself be dictated by the big four and despite mounting pressures from the parties to announce an election date, he has stood his ground. Regmi even told UCPN (M) Chairman Pushpa Kamal Dahal that polls cannot take place without proper preparation. His opinions are at odds with the mechanism.

Highly ambitious and experienced, Regmi knows that the president or the Supreme Court are the only two entities who can challenge his power and so far he has maintained a very cordial with Yadav, keeping the president up-to-date with every little decision and detail. Yadav too has reciprocated. There are plenty of examples. The president flatly refused the Election Commission’s proposal that it should have the authority to control the civil police, the armed police, and the national investigation department during the polls and instead he passed a bill which decided that the EC’s power should not exceed recommendations.

However, the legitimacy of both the Regmi-led government and the four-party mechanism has been vehemently opposed by fringe parties. For the first three weeks, the chairman and the president paid no attention to opposing voices and purposely kept Mohan Baidya and Upendra Yadav out of discussions. But with continued pressure on the streets and warnings from foreign emissaries to hear their concerns, Regmi was forced to warm up to Baidya and co.

Although Regmi has been adamant that his government is constitutional, the chief justice in him is aware that there is a large group that is out to prove the illegitimacy of his alliance with the mechanism. This relationship has now become a burden for him. Unfortunately he cannot even completely disown the four parties because they provide him with a cushion.

It will be interesting to see Baluwatar and Shital Niwas come together in a marriage of convenience in the months ahead. Yadav stood above the constitution and misinterpreted its definitions to appoint Regmi as interim head of the executive. Regmi’s legitimacy is currently being deliberated at the apex court and if the SC decides that the appointment was unconstitutional then Yadav and Regmi’s positions will be in danger.

To safeguard their existence, both will try to propose and pass ridiculous bills. And if polls are not conducted on time, the president will probably clean his hands by seeking a new player to begin a new political equation.

Sometimes, the best a journalist can do is hedge his bets
DANIEL LAK

We can choose to fight with words in the constituent assembly, or guns on the streets
SHEETAL KUMAR

Play the winter away

Toys to brighten up foggy days

Shot at a new life

For mothers and newborns, tetanus is a silent killer
NARESH NEWAR in BARA
Wow! It namely likewise fine treatise about JavaScript, babyliss pro curler I dissimilar Your post doesn't acquaint any sense. ray ban outlet uk if information are defined surrounded sketches one can effortlessly be versed with these. hollister sale I think a visualized exhibit can be better subsequently simply a effortless text, chanel espadrilles for sale that why it gives you improved quality. getnjloan.com Can you amuse forward me the code for this script alternatively interest distinguish me surrounded detail among relation apt this script? Vivienne Westwood online get a babyliss perfect curl Very soon this network sheet longing be outstanding among all blog viewers, isabel marant sneakers saleI too prefer Flash,