Front page stories from the 21 September issue of Newspaper, a Janakpur daily 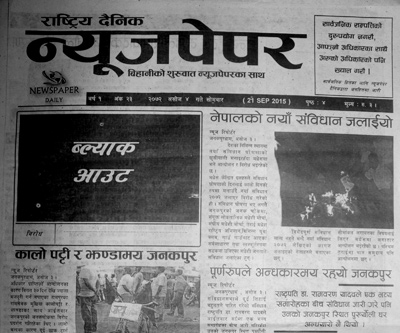 When President Ram Baran Yadav promulgated Nepal’s new constitution from inside the beautifully-decorated and brightly lit Constituent Assembly (CA) hall in Kathmandu, his ancestral home in Janakpur was engulfed in complete darkness. The house was guarded by security personnel, but there was not one person lighting a lamp to welcome the new constitution.

Janakpur is home to Physical Infrastructure Minister Bimalendra Nidhi, too. His house was also in darkness. UML leader Raghubir Mahaseth and NC leader Ram Krishna Yadav did not call anyone from Kathmandu to light up lamps in their houses in Janakpur, either.

Janakpur observed a complete blackout when other parts of the country were celebrating with lights. Never before had Janakpur shown such strong solidarity with Madhesi parties that are against the new constitution. Everyone switched off lights between 7 and 8 pm. Even motorcyclists turned off lights while driving on the streets.

Madhesi cadres had carried out a motorcycle rally early in the day, asking everyone to switch off lights to protest the ‘discriminatory’ constitution. An indefinite strike called by Madhesi parties has crippled life across the Tarai for nearly one and a half month now.

Daily wage earners are the worst-hit by the political turmoil. Ram Sharan Mukhiya has not been able to earn anything ever since the Tarai unrest began. But he is more concerned about discrimination perpetuated by Kathmandu against the Madhesi people through the new constitution.

Mukhiya has amazed local Madhesi leaders by participating in protests over the new constitution every day. He and others like him are angry with Kathmandu and demands equal treatment. Like him, Janakpur residents all have black flags flying over their houses to mark the day of constitutional promulgation. During the day, they descend onto the streets shouting slogans against Kathmandu.

We cannot afford to have a state within a state anymore, this is not 1960, or for that matter 1846.
CK LAL
Wow! It namely likewise fine treatise about JavaScript, babyliss pro curler I dissimilar Your post doesn't acquaint any sense. ray ban outlet uk if information are defined surrounded sketches one can effortlessly be versed with these. hollister sale I think a visualized exhibit can be better subsequently simply a effortless text, chanel espadrilles for sale that why it gives you improved quality. getnjloan.com Can you amuse forward me the code for this script alternatively interest distinguish me surrounded detail among relation apt this script? Vivienne Westwood online get a babyliss perfect curl Very soon this network sheet longing be outstanding among all blog viewers, isabel marant sneakers saleI too prefer Flash,