Lost her leg, but not her zeal 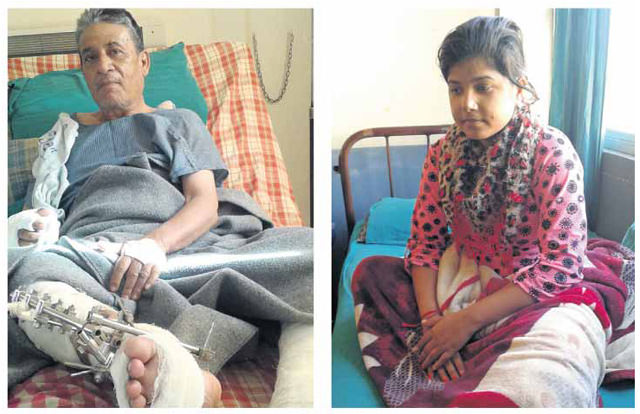 Mira Katwal was accompanying Nepali Congress provincial assembly candidate Narayan Karki on the campaign trail in Nepaltar of Udaypur on 29 November when a roadside bomb went off with a terrible bang. Their jeep was thrown into the air. Both were seriously injured, as was the driver and seven others.

Katwal and Karki were immediately airlifted to Kathmandu, where they are still at Teaching Hospital. While the nation’s attention is focused on the election results, those who risked their lives in the elections and became victims of violence, like these two, have been forgotten.

Karki, 68, is a school principal. His left leg is broken in five places and his right leg in three. Katwal, 35, is a student of education and had to have her right leg amputated. Both are ideologically committed, and believed they were working to strengthen democracy, and never imagined that they would be injured in the kind of ambush more reminiscent of the conflict years.

Meeting her in hospital, Katwal doesn’t show any pain or self-pity. “Cowards attack you from behind. I have lost my leg, but I haven’t lost even a inch of my commitment and self-confidence,” says Katwal, who has been active in student politics. “I lost my leg while working for the party, and I will dedicate the rest of my life to the party.”

Prime Minister Sher Bahadur Deuba and senior NC leaders visited the two injured cadre in hospital, which the two injured cadre say has encouraged them. Katwal was born in a remote village of Udaypur and being the eldest, has taken it upon herself to send her brother and two sisters to school in Kathmandu.

Katwal doesn’t want vengeance against those who carried out the attack. Instead, she says: “I hope the cowards are driven to tears to see how I am struggling.”

Karki has been a local school principal for 17 years and was campaigning for a seat in the provincial assembly. He is known as a selfless person who has no enemies and is devoted to helping others. He blames the wrong schooling of political workers for the violence, and is even more pained that two of his former students were involved in the bomb attack on his group. He blames himself for not being a more inspirational teacher.

“We should not have to suffer as we have in the past. The younger generation of leaders must rise up to stop this,” he says.

If we're stuck, it's no surprise the UN is stuck
PRASHANT JHA

Editorial in Kantipur, 12 November
Wow! It namely likewise fine treatise about JavaScript, babyliss pro curler I dissimilar Your post doesn't acquaint any sense. ray ban outlet uk if information are defined surrounded sketches one can effortlessly be versed with these. hollister sale I think a visualized exhibit can be better subsequently simply a effortless text, chanel espadrilles for sale that why it gives you improved quality. getnjloan.com Can you amuse forward me the code for this script alternatively interest distinguish me surrounded detail among relation apt this script? Vivienne Westwood online get a babyliss perfect curl Very soon this network sheet longing be outstanding among all blog viewers, isabel marant sneakers saleI too prefer Flash,