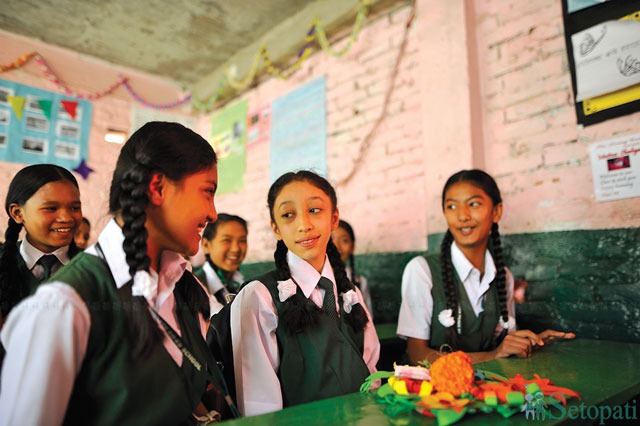 Dressed in her school uniform, Matina Shakya stands at the doorway of her home as her parents and elder sister help her get ready for school. In fact, ever since the former living goddess returned home, her family has been helping her adjust to life outside of the Kumari Ghar where she spent almost a decade, worshipped by the entire nation and under the protection of a caretaker family.

After returning home to Itumbahal, she has started attending Greenpeace Co-ed School. Every morning her mother and sister help her prepare, then her father drops her off on his scooter. Her sister Nijala picks her up from school.

As most such daily activities are new to Matina, her curiosity is never-ending, says her family. “Matina does not talk much but is very curious,” says the girl’s mother, Sunita. “She asks many questions till she is fully satisfied with the answers.”

Matina prefers playing with her sisters and spending time with the family. Every time someone leaves the house, she insists on going along. Her father, Pratap Man Shakya, says she’s like any other child her age.

At school too, she is slowly getting accustomed to her friends and teachers. One week after she started, her teachers have noticed positive change in her studies. Matina has also developed an interest in dancing and playing the guitar.

“The entire school faculty is working hard to make the transition easier for Matina,” says her class teacher Sarina Manandhar. To get her accustomed to her peers, the school took her classmates to visit her when she was still the Kumari.

When we reached Matina at school, she was in computer class, busy learning MS Excel with her classmates. “Initially we thought it might be difficult for her to adjust but she is doing just fine,” says Manandhar. “On her first day, she didn’t really speak to anyone but now she gets along with her classmates and asks questions during classes.

Her bench mates, Abhigya Tuladhar and Prasidhi Shilakar, say they have seen a noticeable change in Matina after one week. “She didn’t really talk to us much on the first day. But she has started to open up more and we even have lunch together,” says Abhigya.

Editorial in Himal Khabarpatrika, 13-27 April
Wow! It namely likewise fine treatise about JavaScript, babyliss pro curler I dissimilar Your post doesn't acquaint any sense. ray ban outlet uk if information are defined surrounded sketches one can effortlessly be versed with these. hollister sale I think a visualized exhibit can be better subsequently simply a effortless text, chanel espadrilles for sale that why it gives you improved quality. getnjloan.com Can you amuse forward me the code for this script alternatively interest distinguish me surrounded detail among relation apt this script? Vivienne Westwood online get a babyliss perfect curl Very soon this network sheet longing be outstanding among all blog viewers, isabel marant sneakers saleI too prefer Flash,