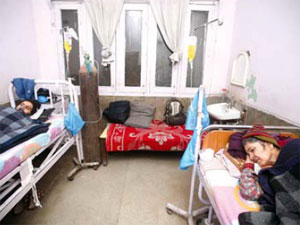 As Nanda Prasad and Ganga Maya Adhikari’s hunger strike crosses 120 days, their health is deteriorating drastically. They are being kept alive through intravenous saline and oxygen masks. Doctors at Bir Hospital suggest putting the elderly couple in ICU, but they refuse to budge. “They are about to die, but the state could be least bothered,” says social worker Sampada Bohara, who has been taking care of the two.

Earlier in 2013, the Adhikaris had been on a 48-day fast demanding an investigation into the murder of their son Krishna, who was kidnapped and killed by the Maoists in Phujel, Gorkha in 2004. The government promised to heed to their pleas and had convinced them to eat. But since none of the accused was summoned for further investigations, they resumed their fast-unto-death on 24 October.

“Don’t do this to us, let us die if you can’t give us justice,” says a frail Ganga Maya as she passes in and out of consciousness.

Nanda Prasad and Ganga Maya spent the winter of their lives going from one government office to another hoping that their son’s murderers would be put behind bars. Two suspects were caught last year, but the district police office in Chitwan refused to register a complaint and the perpetrators walked away scot-free. The formation of a Truth and Reconciliation Commission is still a long way, as the Supreme Court scrapped the lopsided draft TRC bill in January.

But it's not on the road to Mithila
CK LAL

Back to labour woes

One step forward, how many backwards?
ARTHA BEED

Interview with Ram Bahadur Thapa in Kantipur, 29 November
Wow! It namely likewise fine treatise about JavaScript, babyliss pro curler I dissimilar Your post doesn't acquaint any sense. ray ban outlet uk if information are defined surrounded sketches one can effortlessly be versed with these. hollister sale I think a visualized exhibit can be better subsequently simply a effortless text, chanel espadrilles for sale that why it gives you improved quality. getnjloan.com Can you amuse forward me the code for this script alternatively interest distinguish me surrounded detail among relation apt this script? Vivienne Westwood online get a babyliss perfect curl Very soon this network sheet longing be outstanding among all blog viewers, isabel marant sneakers saleI too prefer Flash,