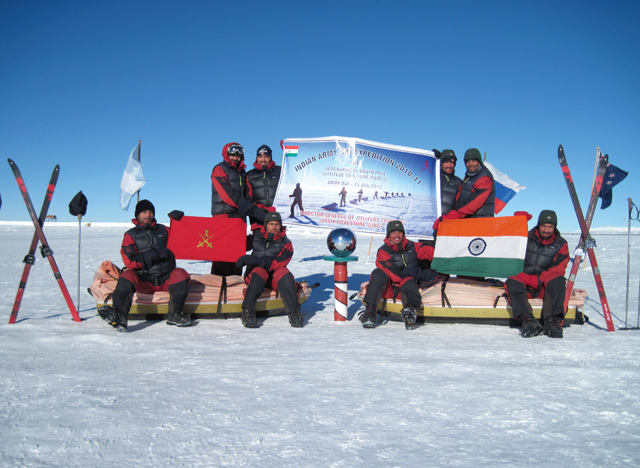 BUTWAL — How many Nepalis have reached Antarctica? Not many. But three Nepalis who have reached the southern continent are living in Butwal and remember fondly their great adventure.

Bhuwan Singh Biswakarma (64), Ram Bahadur Khatri (56) and Arjun Kumar Thapa (34) are from Butwal and all served in the Indian Army, visiting Antarctica at different times during their military careers. Among them, Thapa was even part of a team that reached the South Pole in 2011 (pictured, left).

Biswakarma was actually felicitated by the Royal Palace as the first Nepali to reach Antarctica after going there as part of an Indian Army research team in 1986. Biswakarma still has a penguin egg that he brought back from there as a souvenir. He had taken Nepali topis on his expedition and has pictures of Indian scientists wearing the caps.

“There was a vast amount of ice, no human beings other than us,” he recalls. “I was allowed to speak to my wife on the phone only once a month.”

Biswakarma and Khatri have already retired, but Arjun Kumar Thapa is still with the Indian Army. After celebrating his 28th birthday at -48 Celsius on the South Pole, Thapa was on the Indian Army Everest Expedition in 2015. But his team returned from the Base Camp after the earthquake and deadly avalanche.

Thapa made it to the top this year, and says: “I found climbing Everest much easier than reaching the South Pole. The big difference is that Antarctica was pristine, but Mt Everest is full of litter.”

From Kawaguchi to Kawakita

A hundred years after Ekai Kawaguchi (left) travelled across Nepal and Tibet looking for the Buddha s original teachings,a Japanese anthropologist Jiro Kawakita (above)who retraced his footsteps is back in Nepal to see how development is faring under democracy.

Kathmandu may soon become famous not only for its electric tempos, but also for the women who drive them.
RAMYATA LIMBU
Wow! It namely likewise fine treatise about JavaScript, babyliss pro curler I dissimilar Your post doesn't acquaint any sense. ray ban outlet uk if information are defined surrounded sketches one can effortlessly be versed with these. hollister sale I think a visualized exhibit can be better subsequently simply a effortless text, chanel espadrilles for sale that why it gives you improved quality. getnjloan.com Can you amuse forward me the code for this script alternatively interest distinguish me surrounded detail among relation apt this script? Vivienne Westwood online get a babyliss perfect curl Very soon this network sheet longing be outstanding among all blog viewers, isabel marant sneakers saleI too prefer Flash,