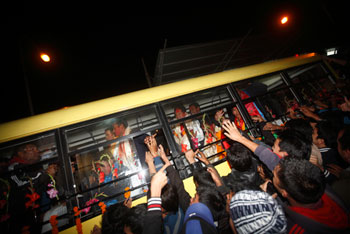 The Nepali cricket team’s performance at the ICC World T20 Cup in Bangladesh last week won millions of hearts back home. Thousands of supporters thronged the airport last Friday to give a hero’s welcome to the squad. Going by their homecoming one would have thought Team Nepal had actually won the World Cup.

After our wins against Afghanistan and Hong Kong, the government, the Cricket Association of Nepal (CAN) and the private sector announced cash prizes for the players. But this incentive alone isn’t going to help. The focus needs to be on building a conducive environment and sound infrastructure which will bring out the best in the players. Among the participating countries in T20 World Cup, Nepal has the poorest infrastructure for the game. Despite that, the team registered two wins in the group stage.

Although Nepal became an associate cricket team in 1996, there hasn’t been much investment in physical infrastructure required for the game. The existing facilities will not help Nepal qualify for the next T20 World Cup or the One Day World Cup.Instead of lavishing cash prizes on players, let’s improve the foundations of sports so we can produce more Paras Khadkas and Shakti Sherchens in the future.

In the next nine months we will participate only in a single international tournament which is the ACC Premiere League in Malaysia. And if things work out, Nepal may participate in the 17th Asian Games. Captain Paras Khadka had said that success hides many aspects of the game but failure takes the veil off. Maybe we are also trying to hide our weakness with the over-rejoicing over the recent success.

If Nepal’s cricket continues to ignore players’ demands for a better environment in exchange for few short-term gains then the quality of the game will be severely affected. To quote Paras Khadka: “We played our best. But to take the level of Nepali cricket higher we need better managers at CAN.” There is no option but to start investing on players and place special emphasis on building infrastructure.

Dristi, 2 October
Wow! It namely likewise fine treatise about JavaScript, babyliss pro curler I dissimilar Your post doesn't acquaint any sense. ray ban outlet uk if information are defined surrounded sketches one can effortlessly be versed with these. hollister sale I think a visualized exhibit can be better subsequently simply a effortless text, chanel espadrilles for sale that why it gives you improved quality. getnjloan.com Can you amuse forward me the code for this script alternatively interest distinguish me surrounded detail among relation apt this script? Vivienne Westwood online get a babyliss perfect curl Very soon this network sheet longing be outstanding among all blog viewers, isabel marant sneakers saleI too prefer Flash,