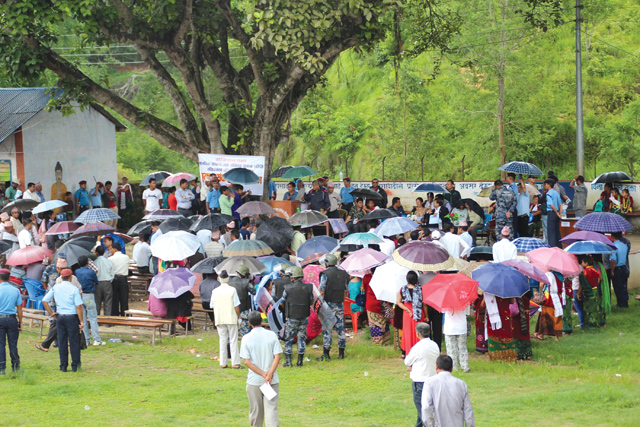 Due to obstacles created by some parties dissatisfied with the constitution writing process, collecting public feedback was not satisfactory in some parts of the Madhes. But where there were no obstacles people turned out in huge numbers, giving credence to the process and raising hope for the new constitution. People also expressed views against some of the points of the 16-point deal, which is the blueprint of the draft constitution. For example, the signatories to the 16-point deal rejected the idea of directly-elected President or Prime Minister. But a majority of people supported it.

The people defied threats of violence to exercise their franchise and elect a new CA two years ago. The political alertness which they showed this week by expressing their views on the draft is a message: they are not tired of the process and are desperate to see the new constitution. Each and everyone’s view cannot be incorporated into the new constitution. But the CA must try to include the most persistent ones so that people will own the constitution. Suggestions collected by the previous CA were abandoned.

The current CA should not repeat that mistake. Ignoring or undervaluing public feedback will be a blunder. The CA’s Public Consultation Committee should incorporate all suggestions in its report to be submitted to the CA’s Constitutional, Political Dialogue and Consensus Committee (CPDCC) which should include all valid suggestions. Incorporating public feedback in the draft will also be an opportunity to win the trust of disgruntled parties and involving them in this historic process. The more political parties endorse the constitution, the longer it will last.

The power of three

A decade of democratic deficit

Using hydro-dollars to mitigate our trade deficit with India is a myth
RATNA SANSAR SHRESTHA
Wow! It namely likewise fine treatise about JavaScript, babyliss pro curler I dissimilar Your post doesn't acquaint any sense. ray ban outlet uk if information are defined surrounded sketches one can effortlessly be versed with these. hollister sale I think a visualized exhibit can be better subsequently simply a effortless text, chanel espadrilles for sale that why it gives you improved quality. getnjloan.com Can you amuse forward me the code for this script alternatively interest distinguish me surrounded detail among relation apt this script? Vivienne Westwood online get a babyliss perfect curl Very soon this network sheet longing be outstanding among all blog viewers, isabel marant sneakers saleI too prefer Flash,